In the 21st century, yoga is no longer considered glamorized stretching or only for young women. Instead, for many people, it has become part of their lifestyle, and for some, even a way of life.

The origins of yoga are shrouded in mystery, but the modern style of yoga, with its standard poses (asanas), can be nailed down to the 20th century when the book “Light on Yoga” was published. The book and the subsequent yoga craze that we’re still witnessing today are why the yoga industry is growing at an incredible pace. With yoga gaining popularity, we also see more and more innovations in this space, particularly with mobile apps.

Let’s look at the latest trends in the yoga industry, the best yoga app, and the future of yoga innovations.

What’s the buzz about yoga in 2021, and how has it been affected since the pandemic?

Like many industries, the yoga industry saw a dip in growth in 2020. And this is reflected in Google Trends.

As you can see, there’s a sharp decline in web searches for “yoga” just as the pandemic hit worldwide. The number of searches hasn’t rebounded yet, but we anticipate this will happen over time.

However, the number of people searching for “yoga” videos rose dramatically during the pandemic. Makes sense — offline classes weren’t available, so people flocked online. And Google Trends for “yoga app” web searches show what can be expected — a rise in 2020 and a drop-off in 2021.

Extrapolating from the data, we can make several assumptions. First, people readily adapted to the changing times by seeking alternatives to classes in physical studios and gyms. Second, yoga-related searches decreased once the vaccine became available and businesses started reopening.

Beyond search trends, many new forms of yoga have emerged under the umbrella of yoga hybrids in the past decade. Yoga hybrids include combining yoga with HIIT, resistance training, martial arts, and many others. And there are some fun ones like did you know that there’s dog and cat yoga? What about beer yoga (originated in Germany, go figure).

So, as you can see, yoga is popular, despite the (temporary) decline in searches, and is practiced worldwide, both offline and online. The appearance of yoga hybrids on the scene also means you have many options to try and possibly niche apps or yoga workouts waiting to be developed.

Speaking of apps — it’s time to look at the seven best yoga apps available for Android and iOS.

7 of the Best Yoga Apps for Beginners and Aspiring Yogis

Nothing can replace doing yoga in-person with a trained yogi, but apps can come close to creating the atmosphere of a group or individual yoga class.

These are the top-7 yoga apps that people love. 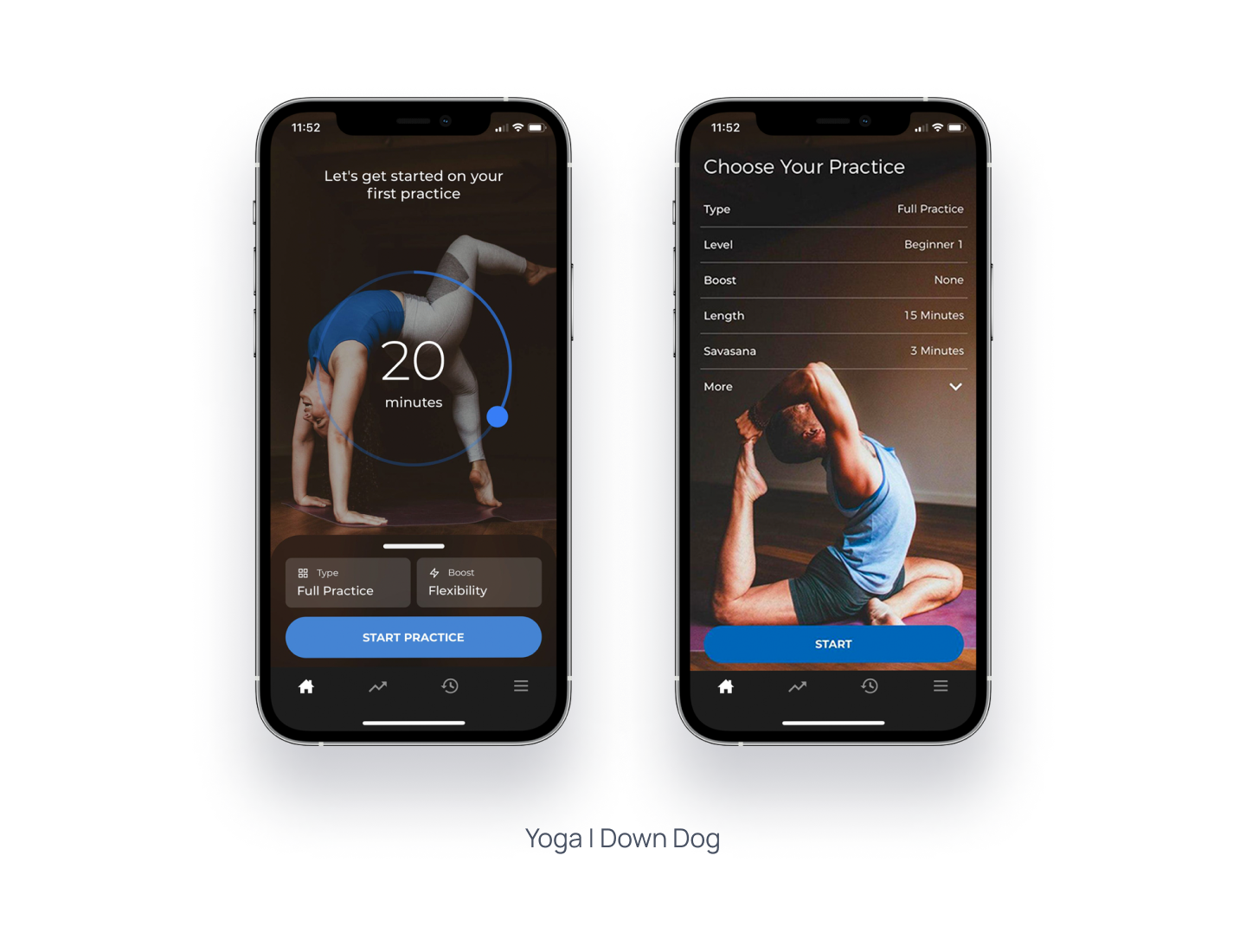 Down Dog develops apps for yoga, prenatal yoga, HIIT, barre (ballet-inspired fitness), and meditation. Their yoga app is highly popular, boasting a 4.9 rating for both Android and iOS apps. One of the app’s standout features is multiple levels of customization. For example, you can customize the routine to keep sessions fresh, change the instructor’s voice, and choose from a selection of mood music. 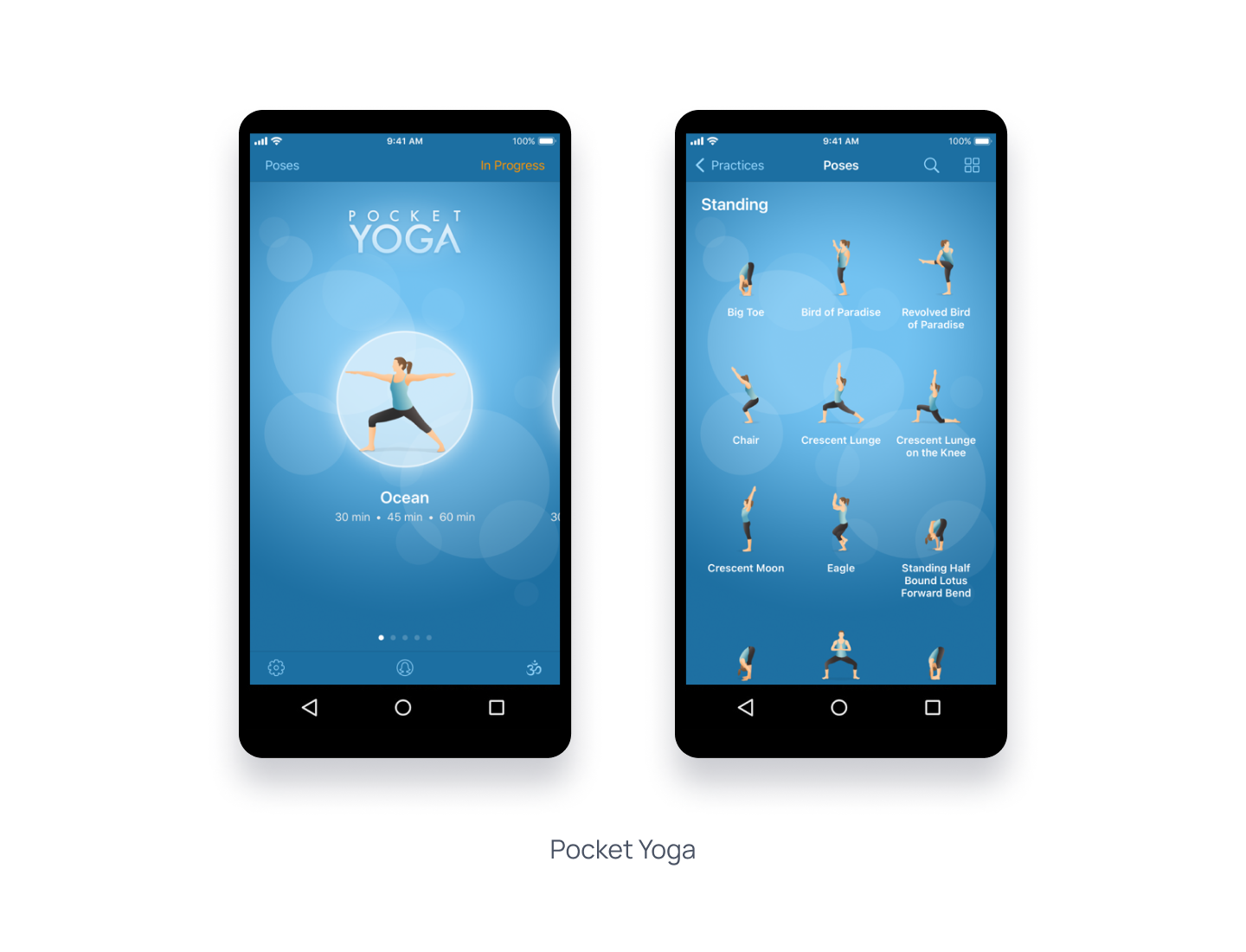 The Pocket Yoga app has a 4.4 rating for Android and a 4.8 rating for iOS. The soothing voices, guided instructions, and music create a yoga atmosphere and experience that keeps people coming back to it. Considered one of the best yoga apps for beginners, Pocket Yoga is Apple Watch-ready and consistently makes “best yoga apps'' lists on the web. 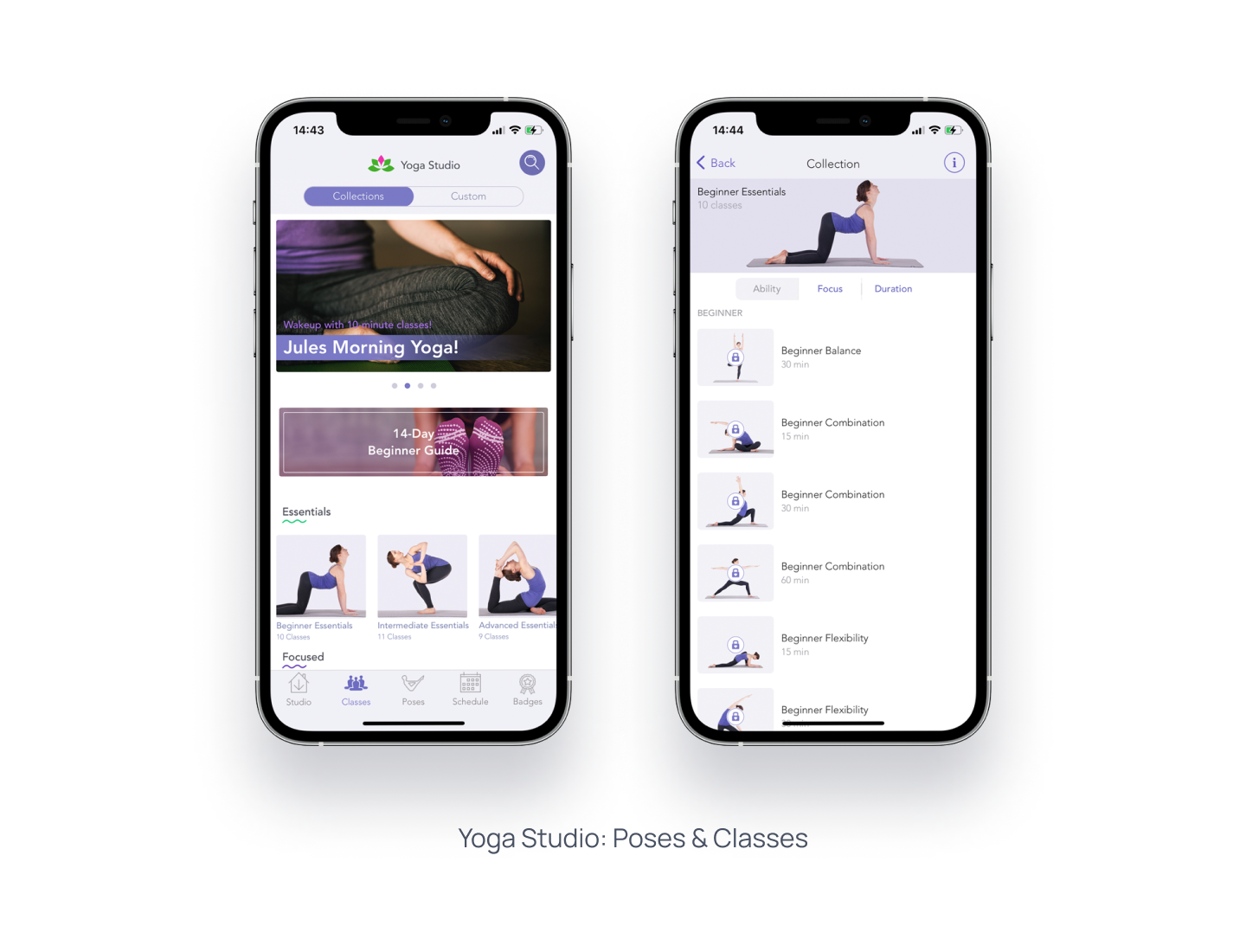 The Yoga Studio app’s standout features are the custom classes and routines. You can choose from 100+ classes (5-60 minutes long), including yoga hybrid classes like Hip-Hop Yoga, Yoga for Weight Loss, among others. Yoga Studio has a high 4.6 rating for Android and proudly displays an Editor’s Choice badge for iOS. However, the iOS version only has a 3.1 rating. 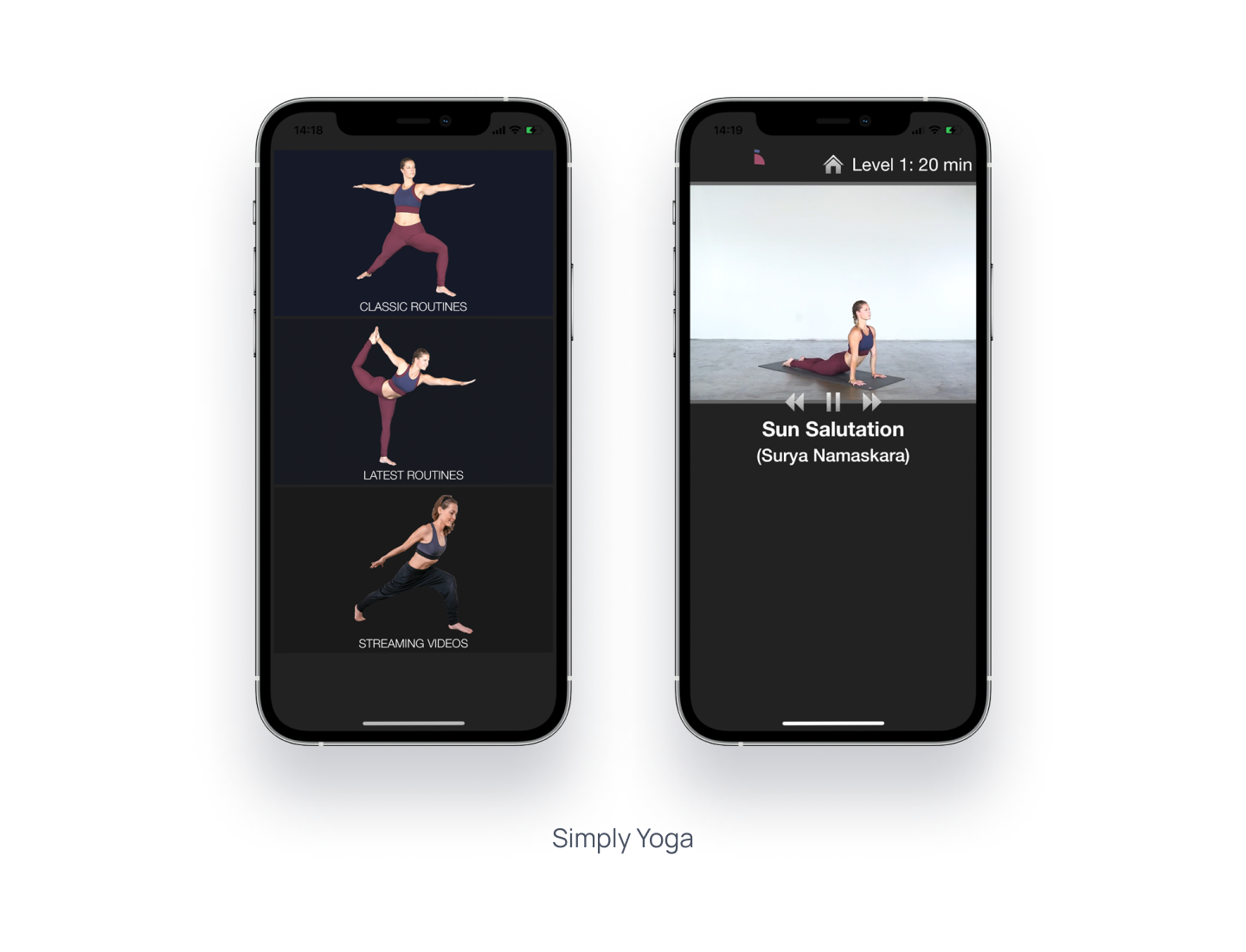 Simply Yoga is one of the best free yoga apps for beginners and advanced users. It features six routines ranging from 20-60 minutes that are easy to follow, thanks to voice and video instructions. Simply Yoga has a respectable 4.6 rating for Android and a 4.7 rating for iOS. 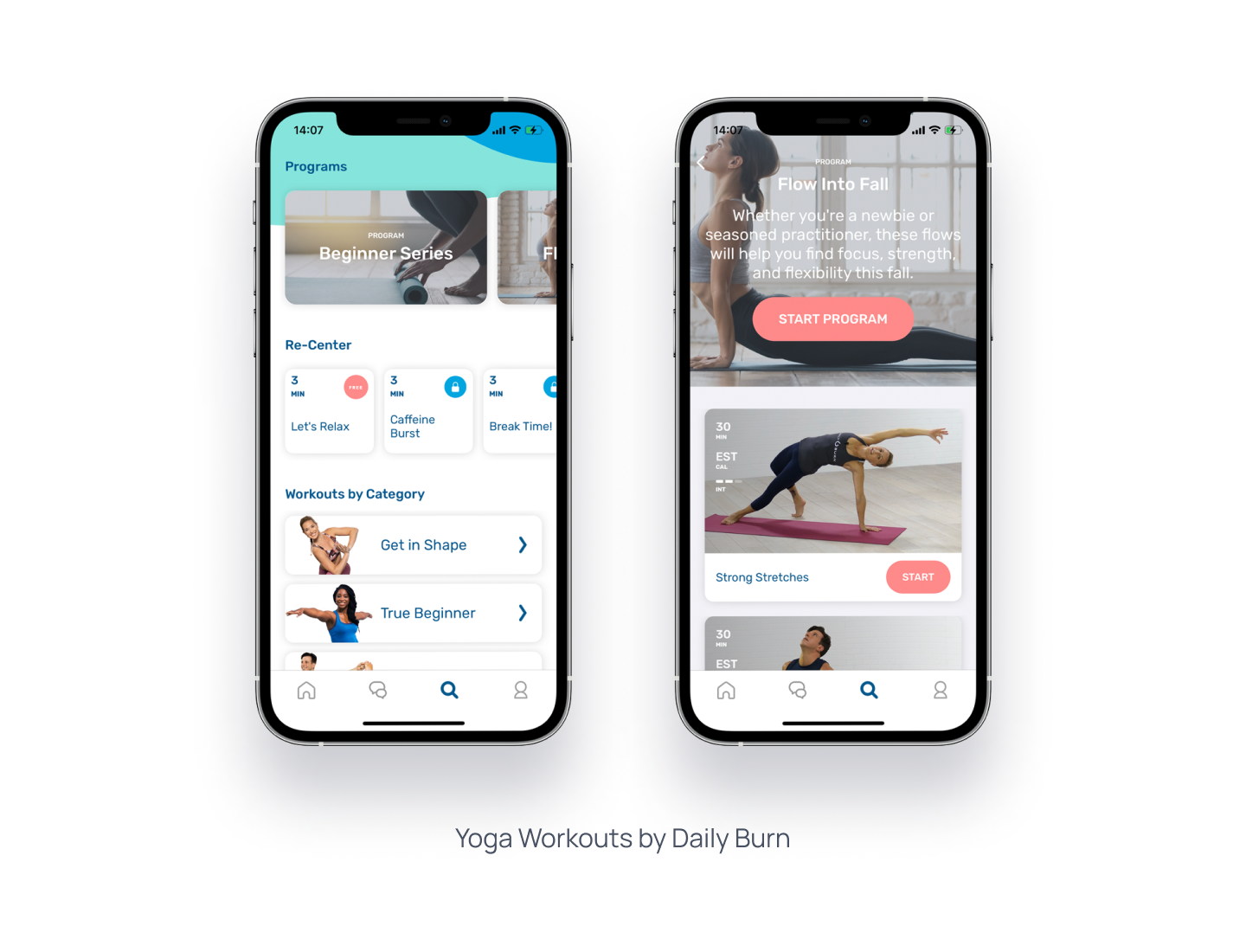 Even though Yoga Workouts, one of the best free yoga apps out there, is only available on iOS (4.6 rating), it has something most don’t — downloadable yoga classes. The app allows you to choose your intensity level and create a personalized plan with 15-45 minute workouts to keep your mind and body healthy. The Yoga Workouts app is integrated with Apple Health, which links data like calories burned to give you an overall picture of your health. 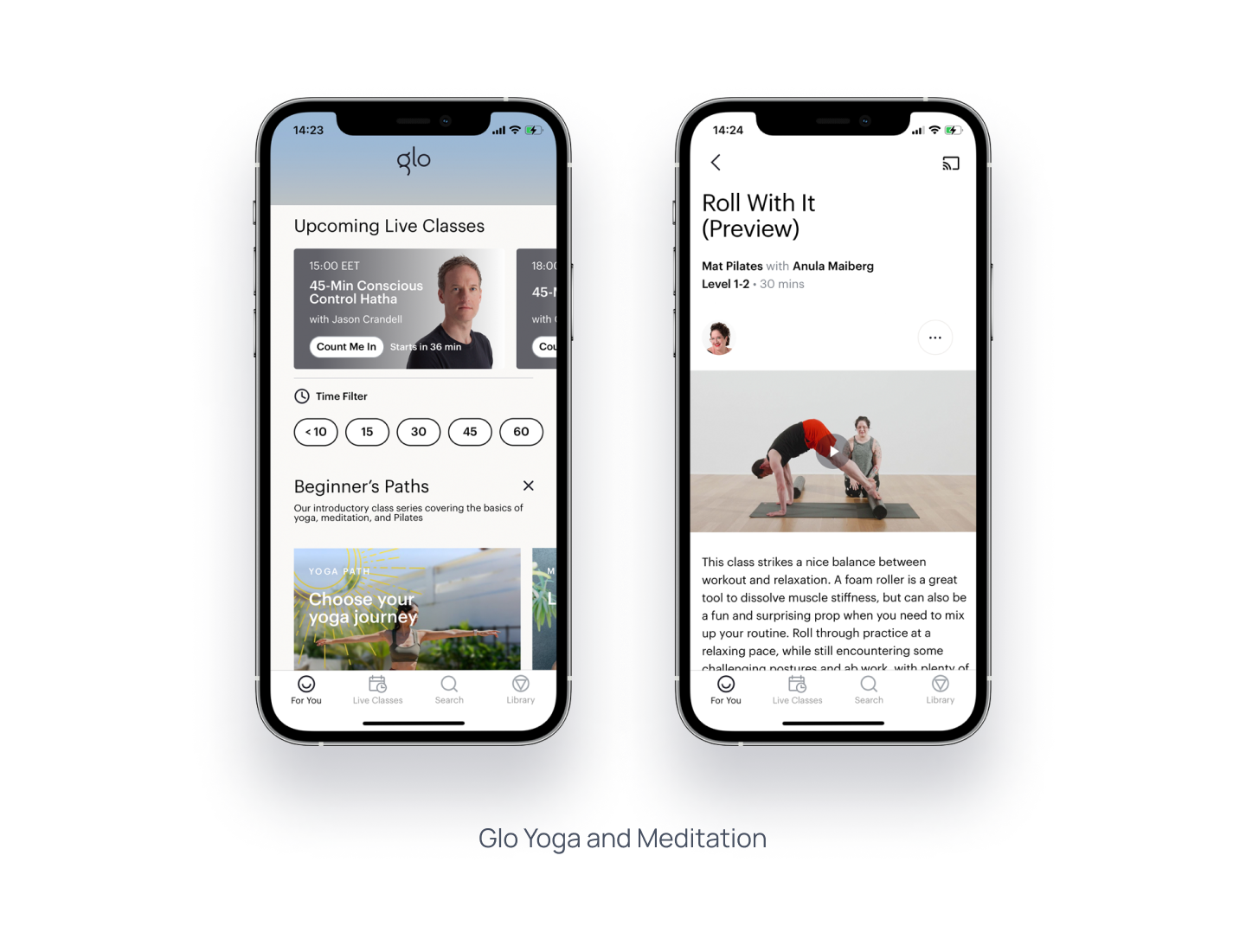 The Glo app has been called the “only yoga app that rivals taking an in-person class” by Self. Thousands of users on Android and iOS love the downloadable 4,000+ on-demand yoga classes, live yoga classes, and customizations. The downside is that it seems a different company is now developing Glo (evidenced by the increasingly lower rating for Android). In addition, Glo has a short 7-day free trial and costs $18/month ($162/year) after that. 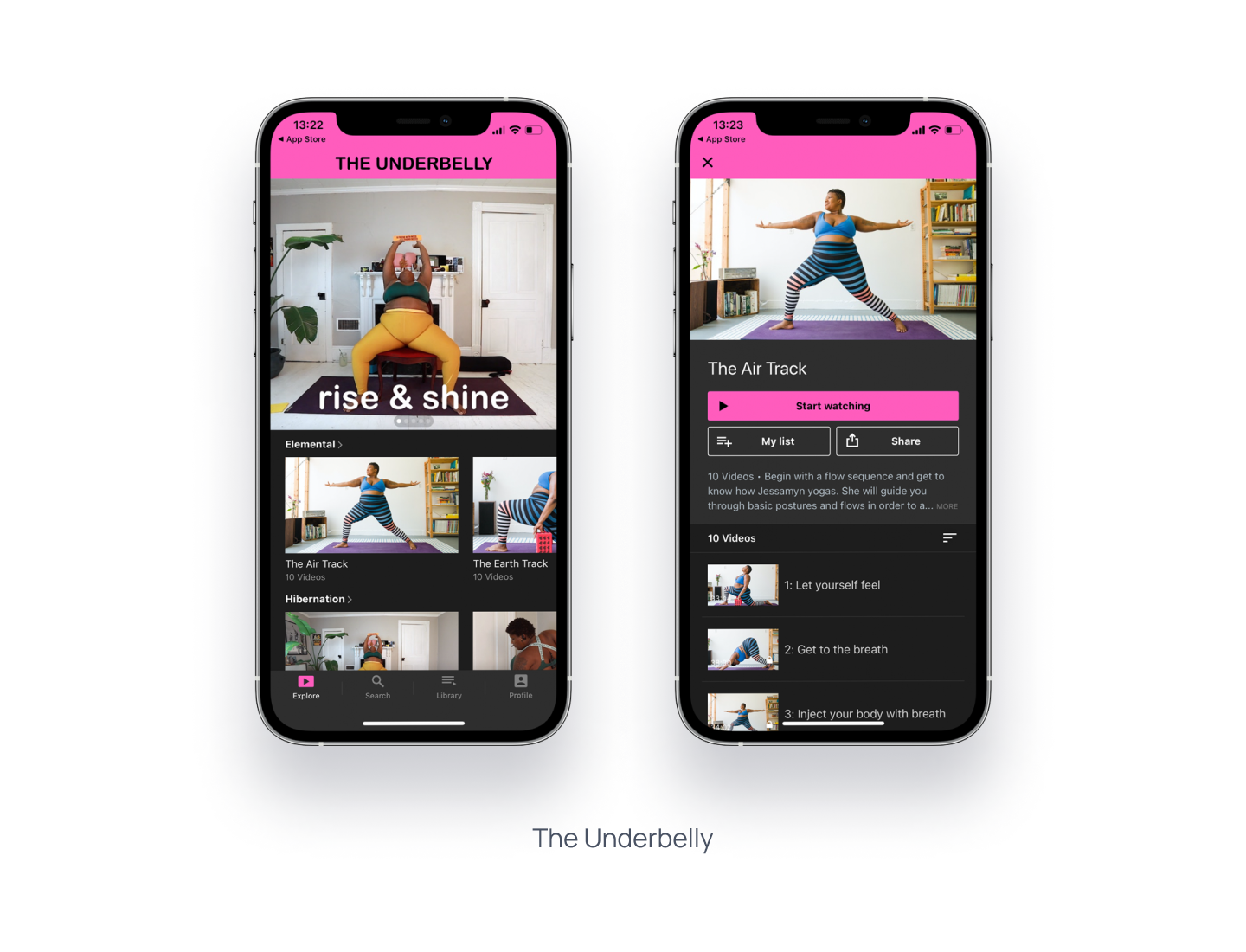 You could say The Underbelly is a Covid success story. Launched in 2020 by Jessamyn Stanley, a plus-sized yogi, the app is making a strong entrance for Android and iOS, with a 4.9 and 5.0 rating, respectively. The Underbelly is the best yoga app for men and people of all genders who feel yoga is only for slim, super-flexible athletes. Also, the app allows you to stream and download to your device for later.

The return to our normal lives was at first thought to be inevitable. And for the most part, we have reclaimed the comforts we were used to pre-Covid. However, the appearance of new viral variants may require us to pivot, stay agile, and find new avenues of growth, like we all collectively learned to do during the 2020-2021 lockdowns.

Whether for yoga, messaging, or what have you, any app today must continue to innovate, introduce new features, and embrace the digital future.

So what does it take to design the best yoga app? First, you need to emulate the feeling of being in a yoga studio and doing yoga live in a way that people feel comfortable practicing at home or on the go.

You can do this like Down Dog Simply Yoga, and Yoga Studio did with personalization, and custom yoga flows/routines, or Yoga Workouts by Daily Burn and The Underbelly, which offer downloadable HD videos. Or take the immersive approach like Glo and Pocket Yoga have done to harness the power of technology to bring yoga closer to home.

Or, you can blaze your own trail with the help of experienced mobile app developers. 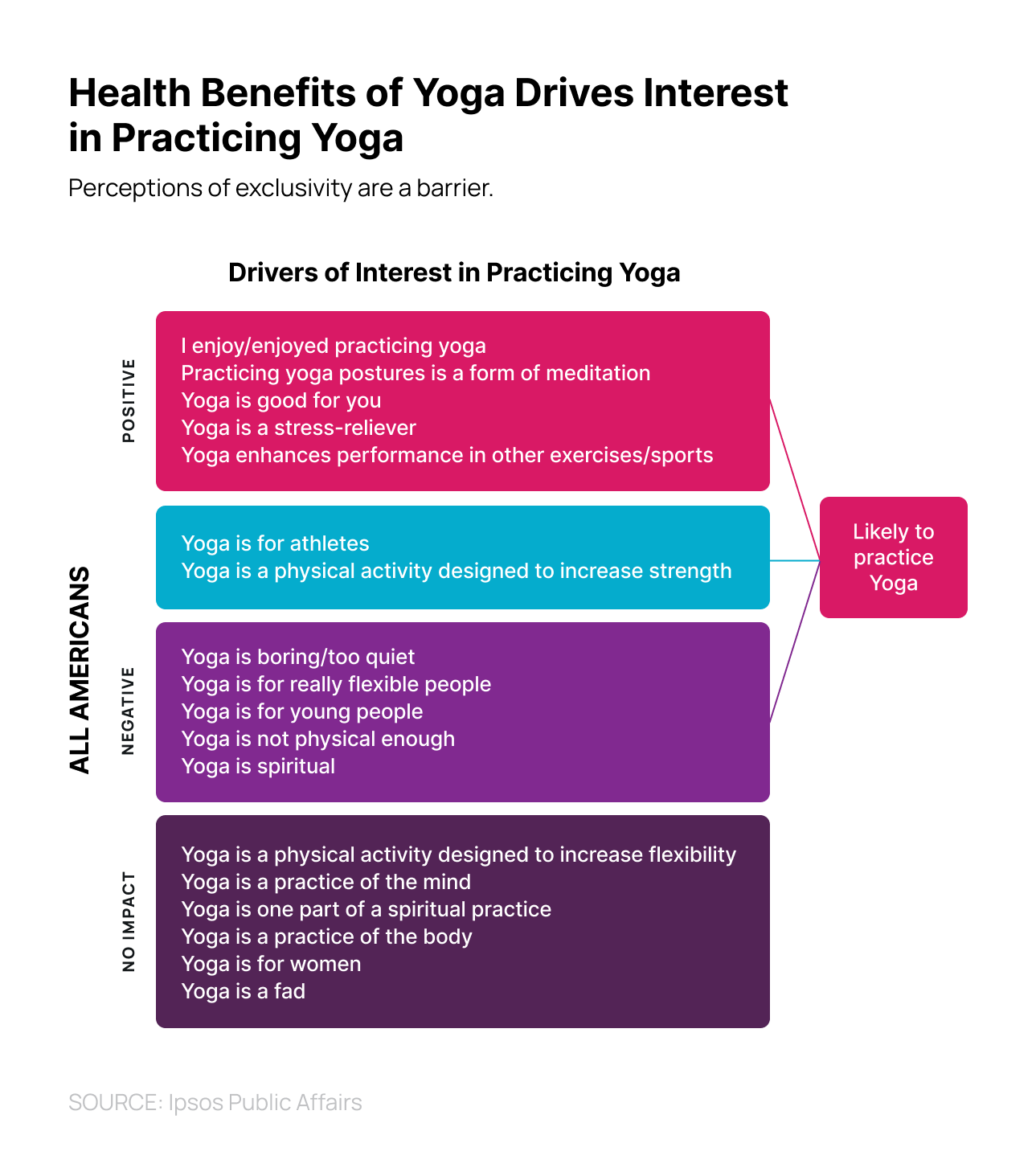 Another way to reach more people is to look at how they perceive yoga. As you can see on the chart above from the Yoga in America Study, yoga is perceived as enjoyable, positive, healthy, and improving wellness. However, on the negative side, many fear yoga is too boring, only for young, flexible people, and includes too much spiritual mumbo-jumbo.

You can target potential users by focusing on the positive health effects in your yoga app and showing that yoga isn’t about having a perfect down dog or memorizing mantras.

What is the best free app for yoga?
What are the best yoga apps for Android and iOS?
Which yoga app is best for beginners?
Can yoga help you lose weight?
4.51
Thank you for reading! Leave us your feedback!
146 ratings