React.js vs Angular. They are equally good at building web-based applications. Some of the world projects are built with React.js, others of the same size, with Angular.

These examples emphasizing both React.js and Angular are suited for making large and scalable platforms, handling massive requests per moment.

Origins of Angular and React

Software engineers developed front-end frameworks like Angular or React, believing that a good product should be built and operate flawlessly. AngularJS was created in 2010 by Google developers Miško Hevery and Adam Abrons. They called the new framework 'Angular' because it works in an HTML file and has angular brackets.

Six years later, it was rewritten, so much so that you couldn't simply update to the new one you had to rewrite your whole application. This created a reasonable divide between the users. Some couldn't justify the long and costly migration, while others became fans of the improved version. The older one bears the original naming. The newer Angular removed the ending in a true minimalist fashion. Still, Angular JS is supported and even used on some current Google platforms.

The original AngularJS implemented an architecture called Model-View-Controller, or MVC. It means that an application is separated into three layers:

Traditionally, each object in the code has to construct a dependent object. So if we need to change the dependency, we have to change the object too. So instead of attaching dependencies to objects, AngularJS attaches injectors to objects that wire them to dependencies being stored in a central location. As a result, we can reuse code and mock those dependencies when writing unit tests.

Finally, directives are the most used part of AngularJS as they are the ones extending classic HTML. They work as markers on a DOM element, telling AngularJS what behaviour to attach to that element. Basically, they make it possible for HTML to create dynamic content. So all of this established AngularJS as the perfect tool for building single-page applications (SPA) with tons of elements to interact with.

AngularJS corresponded to the programming experience of .Net and C# developers, who used to work with server-side applications. It presented a perfect user experience, though it had some performance issues. The larger application was, the slower it operated. The data within the central location was hard to manage, making the applications slow and buggy.

While AngularJS was struggling with those concerns, Facebook presented its own front-end library in 2013. It was called React and designated to be the V in MVC. The main concept was based on components as independent features with their own structure and APIs that can be copied and reused, easily tested and replaced. Also, one component can be updated without refreshing the whole page, while MVC separates all functions into specific levels.

The AngularJS team refused to accept defeat and launched a big update three years later, in 2016. Its new approach was inspired by React. They used its component-based development principle. Further, when comparing React with Angular, we will keep Angular 2+ in mind, in contrast with AngularJS.

React.js gets on the top position and overruns Angular with the number of Node Package Manager (NPM) downloads on GitHub. The difference is huge. 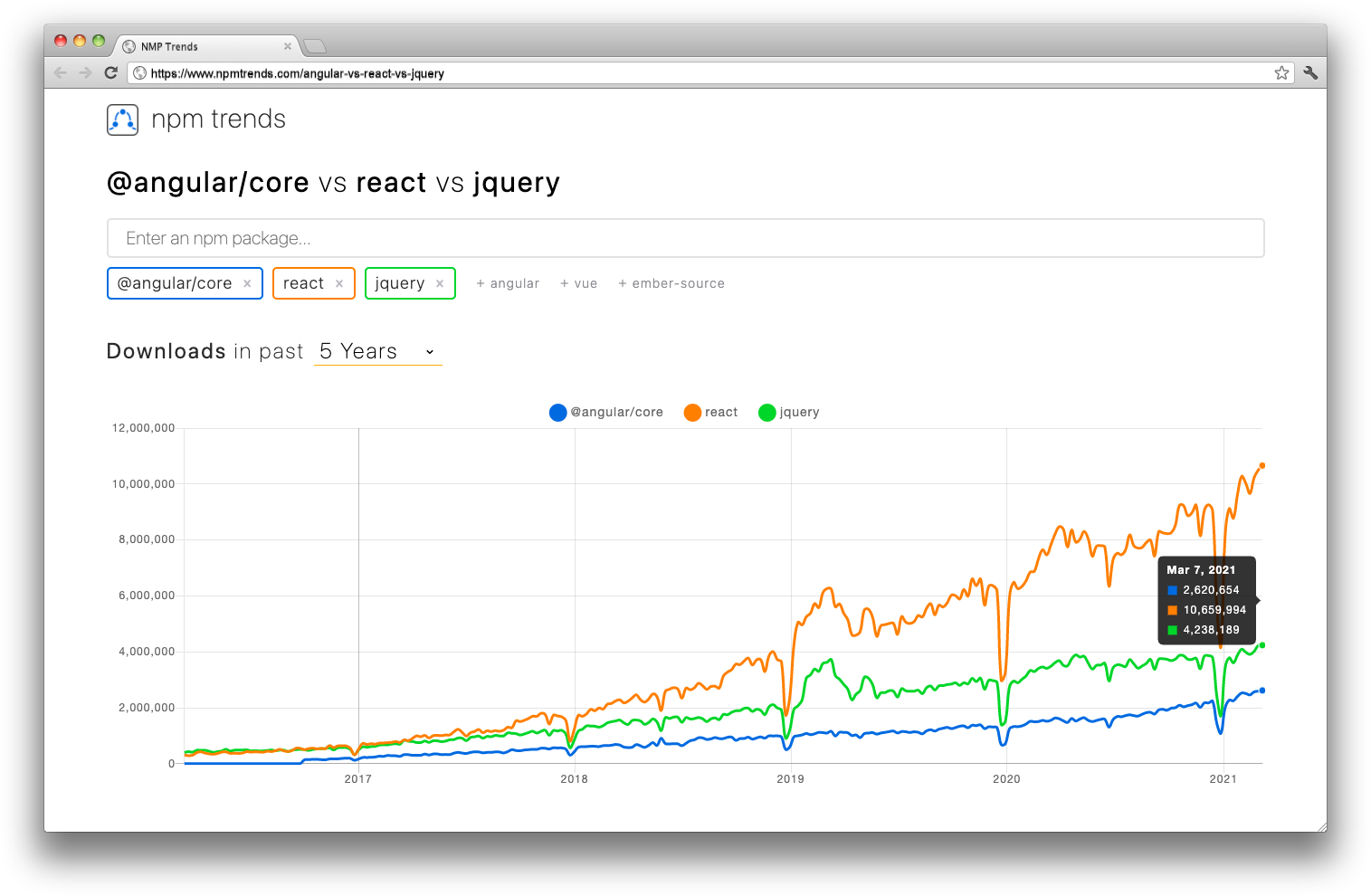 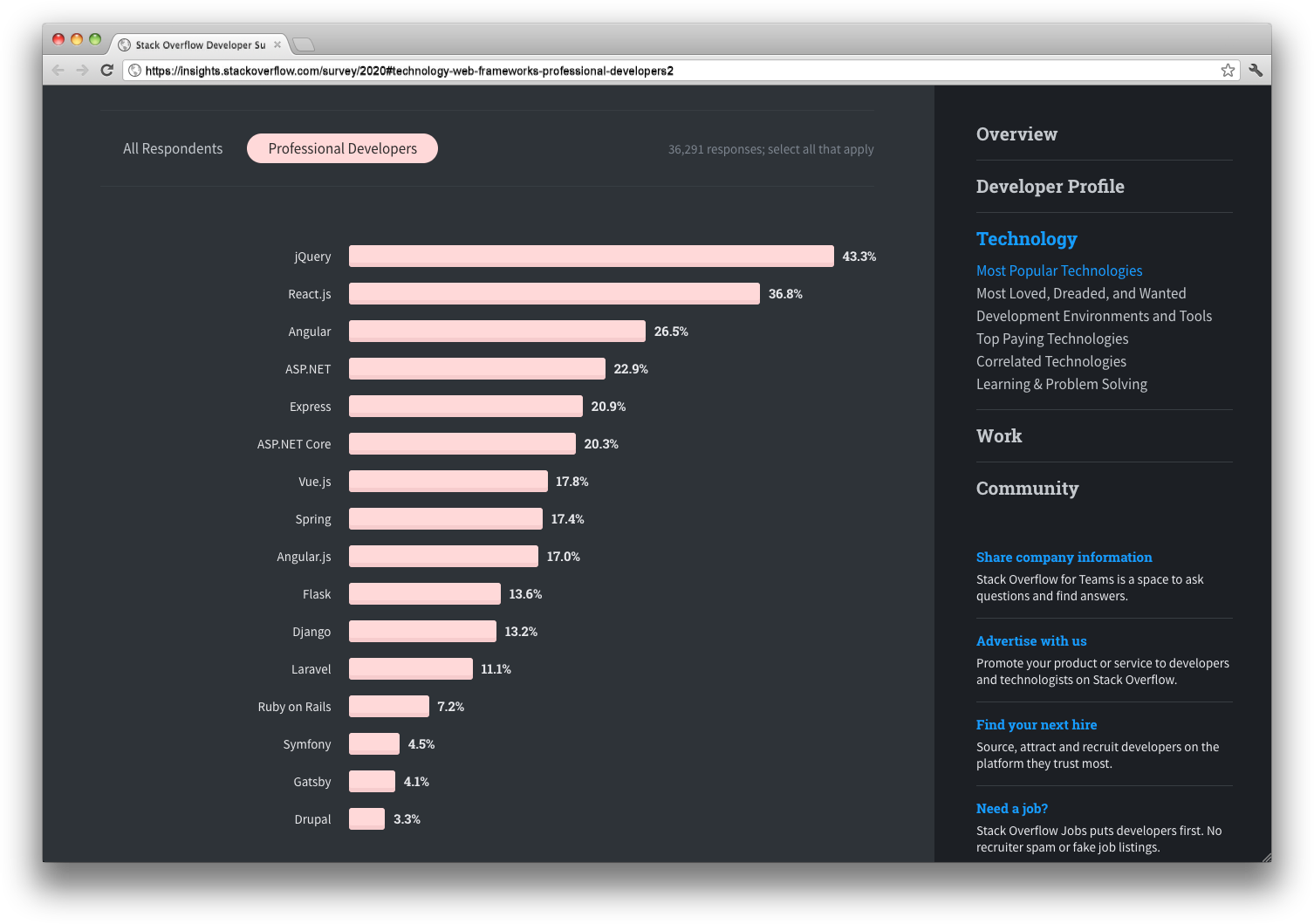 Does it mean that something goes wrong with Angular? Or, does it imply React.js offered better solutions than Angular?

Let's figure it out by overviewing both systems in a nutshell. Angular originates from the startup products of Google, where the key of product development was to manage multiple processes in one place. Any unreasonable decision could lead to a problem and affect billions of user operations run in a moment.

Angular became a monolithic framework that predefined programming steps. Even though it enriches the development process with the services, controllers and modules, it dictates its own way of thinking and working. That places a distance between programmer and framework.

Along with that, there are a few other factors that make Angular less accessible:

Apparently, the learning curve is very high. Unlike React.js, Angular demands more OOP-related experience from developers. That worked for Google, considering their team's high expertise. Angular was envisioned as an end-to-end solution and was compatible with their advanced programming culture.

Despite the complexity of the architecture, Angular has its indisputable benefits:

Angular is enriched with many other valuable features, like UI Material, making it possible to reuse the code of components in other parts of the project, but this is similar to what React offers too.

Experienced front-end developers share that Angular fits well with enterprise solutions and the corporate sector when React.js is a better choice for early-stage startups and smaller companies. This could be explained that big business does not change their priorities very often and the strategic goals are known to their CTOs far earlier.

The main point you could take from our overview is to remember that Angular is a better option for long-term projects requiring reliability above anything else. Besides others mentioned in the list, a few more companies are using Angular: Microsoft Office, Deutsche Bank and Samsung.

React.js even doesn't call itself a framework but a JS library. Unlike Angular, React.js makes it a developer's responsibility to set a project structure, find relevant services for HTTP routing, and so on. At this point, React's ideology is to be agile and provide developers with absolute freedom. As a result, it leads to minimizing the project's size from start, as they could involve those libraries that they need by a certain time.

Let's imagine that you are the only front-end developer on the project, or there are just a few. The main goals are set for the shortest perspective here. You should be both fast and productive, be able to adjust to startup goals. The straight rules and architecture demands of Angular will slow down the process of development.

So, following single policies is not a major priority for the React.js community. In fact, this is straight opposite to Angular.

It is worth mentioning, React.js couldn't work alone, as it is only the View (V) and needs an engine for data processing. A developer needs to figure out its implementation, manage with Redux and Saga, and arrange that individually.

What problem does virtual DOM solve?

The current situation is next: if anything has been changed in a user browser while clicking on a page, these changes will be automatically recorded to the DOM. To show the changes on the web-page, the browser should reload the entire DOM structure. It brings more loads to the browser and slows down the performance of the application.

React.js has such computing algorithms that allow it to decide when to update the DOM in the browser. That makes front-end applications very performative. Unlucky, Angular doesn't have anything similar to this feature.

With that said, React.js helps to write clean JavaScript code for the projects when Angular complements the HTML with many extensions. This becomes messy in a while and hard to deal with such an enlarged code.

It is time to say: React.js dominates in the front-end development area today.

Advanced features, ease of use, extensive collection of javascript libraries placed React.js in a higher position than Angular. That proves the idea that the user-centered approach is a king. React.js has become an intuitive and powerful resource for making front-end applications.

The discussions like 'Angular vs. React' are obviously coming to an end because of the React.js win. Nowadays, the community is much interested in other frameworks like Vue.js and comparison of that kind will be more actual today.

What is the customer experience of React vs. Angular?
Why do developers prefer React.js over Angular?
Which is best: "React vs. Angular"?
What are the benefits of Angular?
When to use Angular vs. React?
4.61
Thank you for reading! Leave us your feedback!
859 ratings