The industry of ride-hailing is rapidly developing all over the world today. It began gaining momentum a couple of years ago, when more and more participants entered the market offering various features and services to stay competitive.

The first company that implemented the concept of ride-hailing was Uber. The history of its development dates back to the year 2009, when it entered the market under the name UberCab. To date, the company remains the most well-known worldwide, even despite the number of competitors, many of which managed to achieve success and gain popularity.

Uber’s business model comprises three main components: passengers, drivers, payments. It helps people willing to get affordable riding services with drivers desiring to help these individuals for a rather modest price. On its part, Uber remains the facilitator of this process by providing all the necessary conditions to make the deal happen. The chosen model turned out to be extremely successful, and various startups tried to apply it to achieve the same results.

Today, many apps like Uber are available to people all over the globe. Let’s figure out some interesting facts about the main Uber’s competitors below. 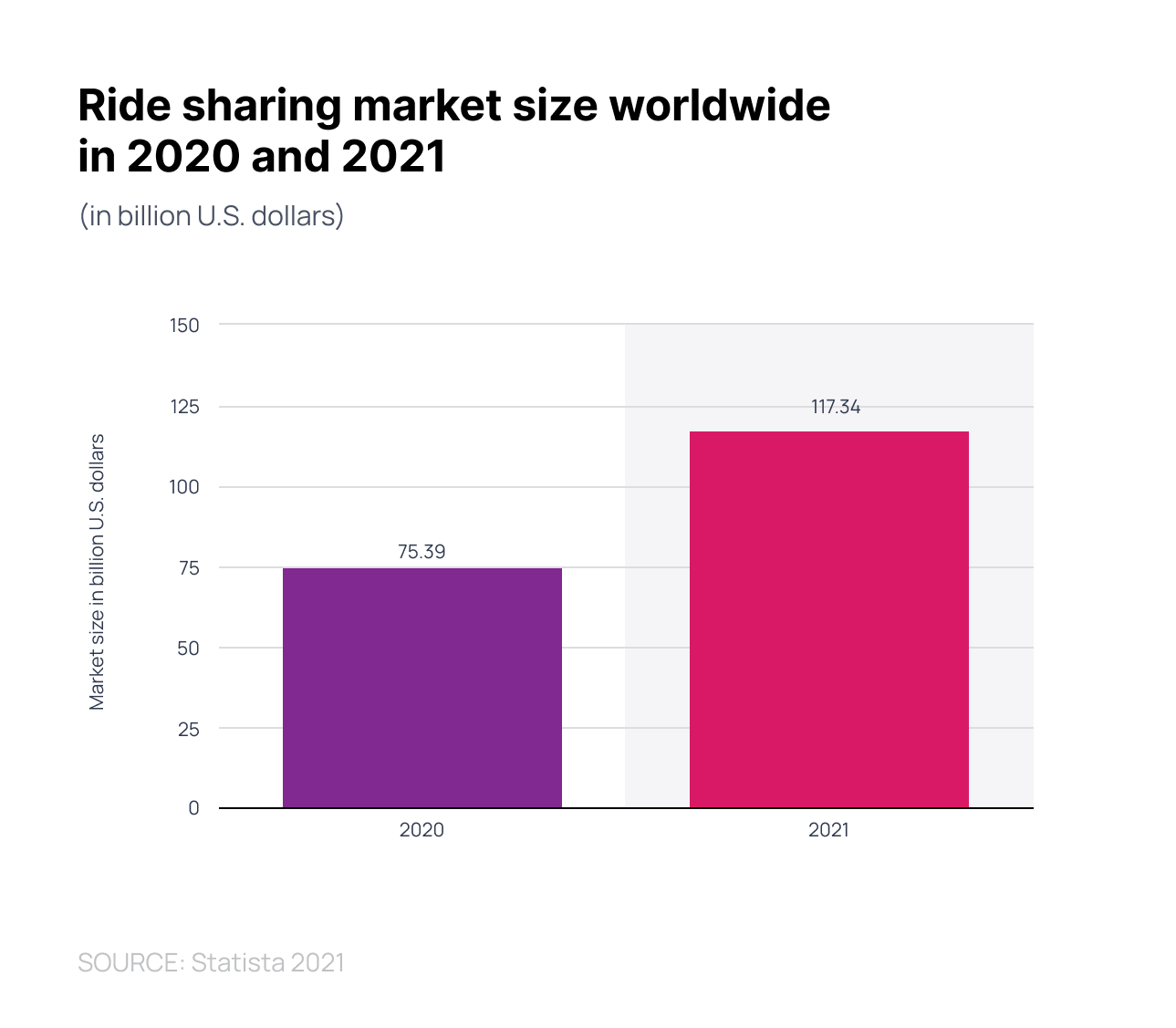 Unfortunately, the ride-hailing industry was among those affected by the COVID-19 pandemic. The main strikes were caused by several lockdowns and self-isolation restrictions. Moreover, many companies switched to remote work mode, which, in turn, eliminated the need for many workers to get to offices. The practice of ridesharing became especially unpopular and unclaimed.

Nevertheless, most companies stayed on board and kept providing their services. The demand started increasing in developing countries, such as India, Vietnam, Singapore, which resulted in the emergence of new players on the market and the existing companies extending the areas of operation.

According to Statista, the most popular ride-hailing operators in 2019 globally were:

Nevertheless, each company has its particular market share in the region it operates in. Therefore, although the operators mentioned above are considered to be the global leaders, there are a number of other industry players mostly widespread in the USA, Europe, Asia, and China. 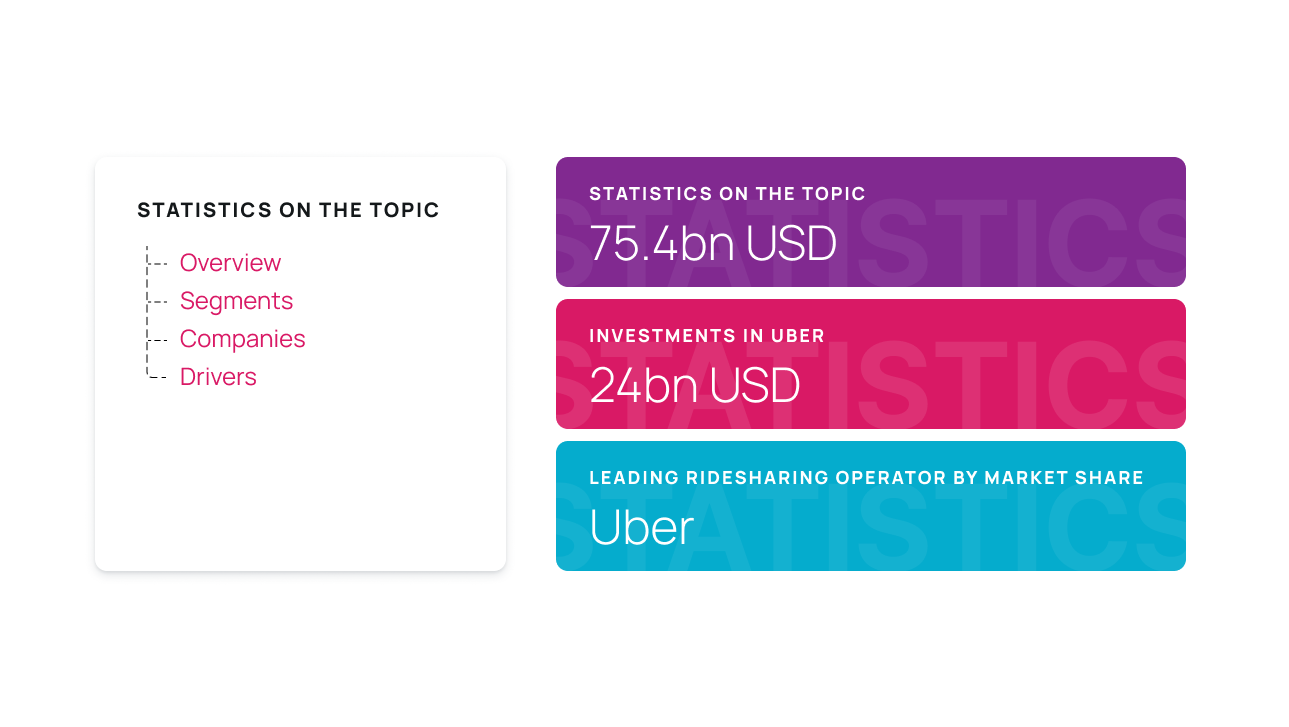 Top Ride-hailing Apps in the USA

Since the US is a country where ride-hailing services were offered initially, the industry is rather developed on its territory. It comes as no surprise that Uber takes the leading position in the US, with the second being Lyft, and other operators having almost similar shares on the US market. 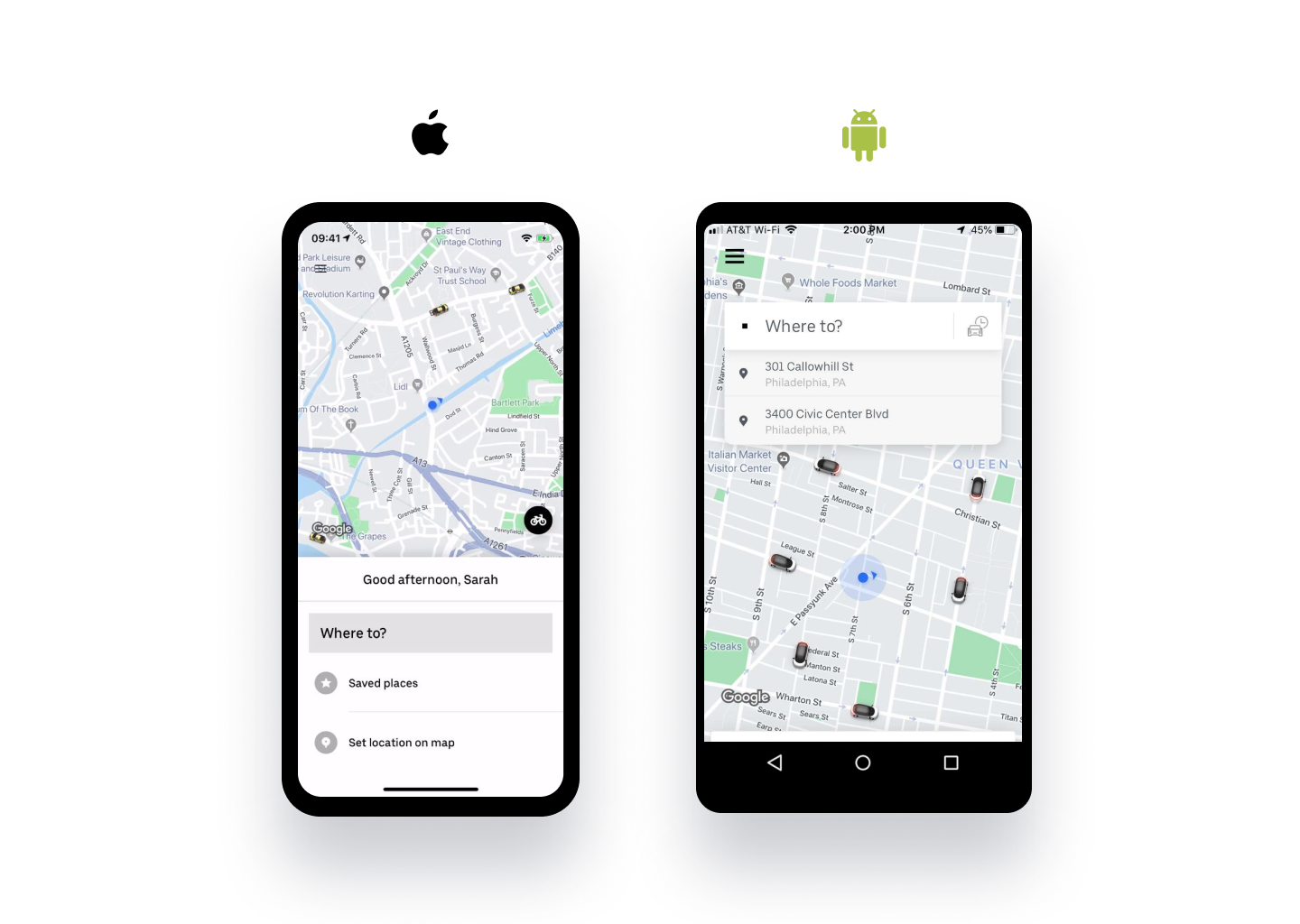 As it was previously mentioned, Uber can be fairly considered the most popular and well-known in the world. The company was established 12 years ago, and during the period of its development, it experienced various innovations, from changing the name and significantly expanding the way of providing the services to adding new possibilities for customers.

By using a rather simple business model, Uber gained success and popularity rather quickly. The two so-called participating groups of this business model, namely, drivers and passengers, enjoy respective benefits. The former make profits by helping passengers get the riding services they need, while users get affordable and transparent on-demand services that are easy to control and order using a convenient app.

Actually, Uber keeps on taking the leading position since other operators just follow the same business model and offer almost similar services and functionality it does. Nevertheless, the company is the generator of the majority of ideas and innovations.

The range of features provided by the Uber app is rather common now, and it includes:

The application is written mostly on JavaScript, thanks to which, it looks appealing and works without lags. Proper calculations are available due to Python used by the developers.

Today, Uber services are available in more than 80 countries and 10,000 cities. Of course, the biggest coverage is in the US, the home country. The range of the most frequently used services comprises Uber Eats, Uber Transit, and Uber Freight. A lot of companies established partnerships with Uber to cover diverse transportation needs on favorable conditions.

To maintain the reputation of the best service, Uber tries to assure the most convenient ride for every client. Thus, customers have freedom of choice. Uber allows choosing price, vehicle model and class, route, etc. Moreover, Uber provides a reliable identification system for drivers and riders as well. When ordering, a client needs to register the identity.

One of the main weak points of Uber (by the way, other similar operators are not exceptions) is varied pricing depending on weather conditions and demand. This leads to the absence of stable income for drivers and loss of customers from time to time. 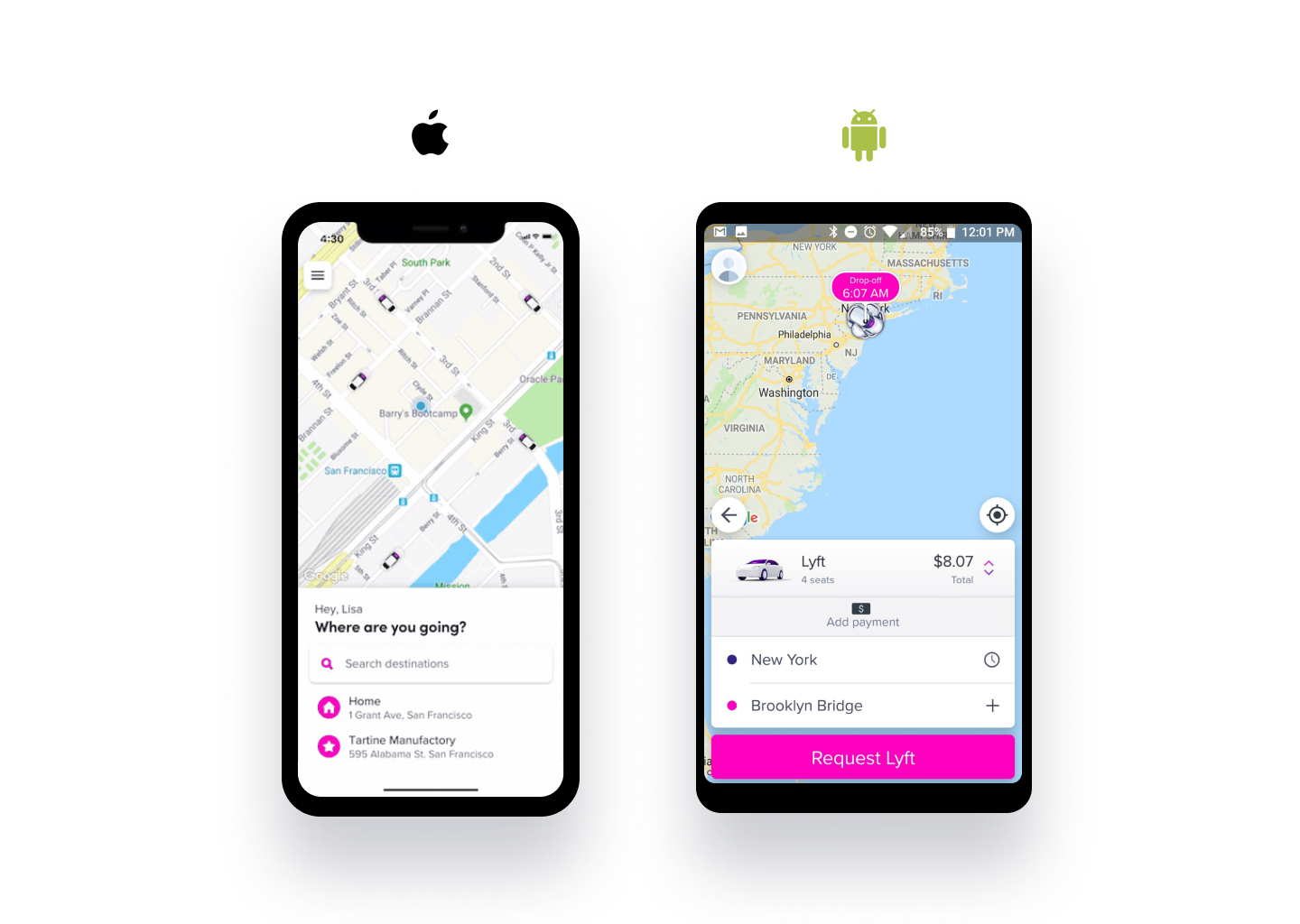 This is another American leading company in the industry. As of 2020, its share on the US market was almost 32%. Lyft emerged in 2012, and initially, it worked as a peer-to-peer ridesharing mobile program, which was a great option for those who wanted to ride with a private driver.

Today, Lyft adds taxi-hailing to its service list. In fact, the working system of Lyft is very similar to the one of Uber. Its version for iOS is written completely in Swift, but the developers also used JavaScript and Python for the Android version.

With the app, you can order a ride and choose such options as route, car, etc. Last year, Lyft has raised a hefty $2 billion.
The range of services provided by Lyft is more limited than the one available with Uber, but as a company that takes care of its customers and reputation, Lyft guarantees that every user can find prices and vehicles to taste and needs. 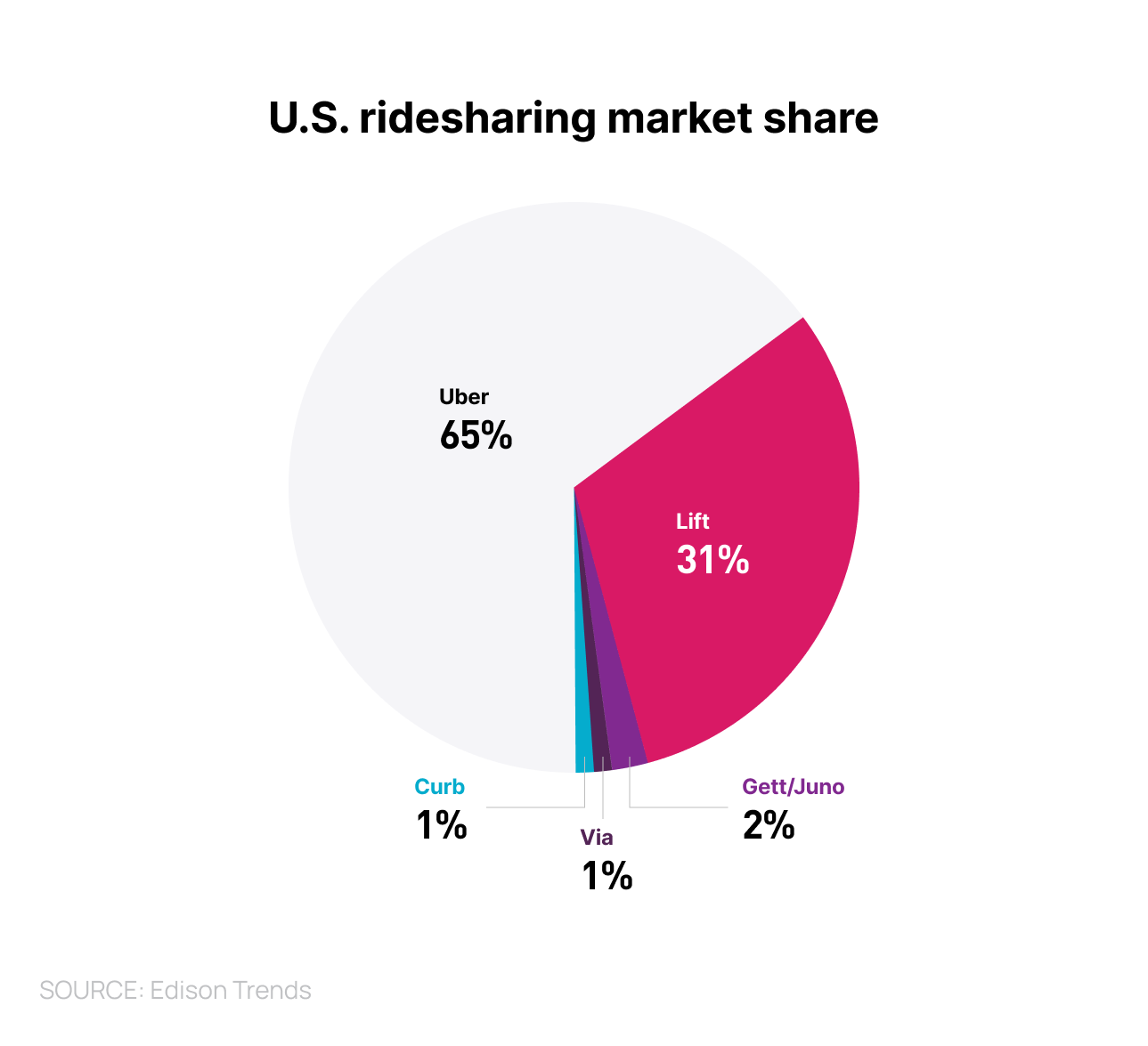 Among other popular operators providing ride-hailing and on-demand services in the US are Curb, Via, and Gett.

Via is famous for its unique “logistic engine.” Its main aspect of focus is carpool rides, which make it possible for customers to significantly save their budgets. Besides, all interested in ecology issues love that such rides help avoid extra carbon emissions.

Curb is more of a taxi app providing scheduled pickups. The drivers working for this company are registered workers, not partners. However, the work of the app is far from perfect, and other competitors are more popular among users.

Gett appeared on the US market no so long ago. It assures stable prices even in periods of high demand, traffic, or inclement weather. 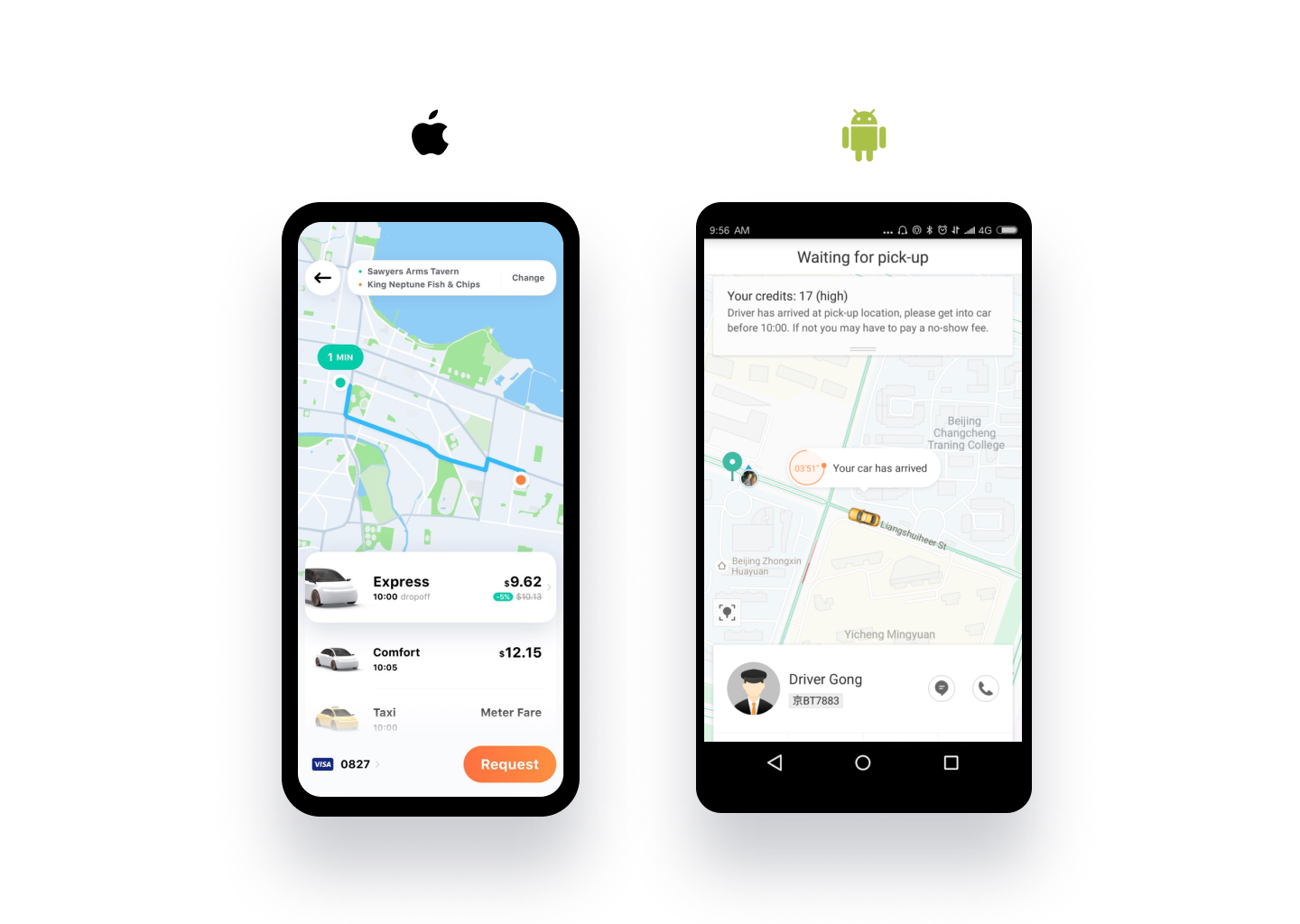 On the list of Uber-like apps is Didi Chuxing, a successful Chinese mobile transportation platform. The company was founded in 2012. Over years, it acquired some of its main competitors in China, and in 2016, its market share in the country was 90%. In 2014, its market value was almost $70 bn. In 2020, the company’s revenue reached around $22 billion.

The company started with a taxi-hailing service, but today, it offers private cars, social ridesharing, carpooling, buses, chauffeurs, and services for diverse businesses. DiDi uses a business model similar to one implemented by Uber. There are separate apps for drivers and clients that require registration for both parties.

Last July, the company completed a $2 billion series-F funding round, which helped it snag one of the top spots. Today, Didi Chuxing is valued at $16.5 billion.

To stay competitive and incur minimum losses during the pandemic, the company introduced several innovations. First of all, cabs were equipped with special protective sheets between the driver and the back seats. Secondly, all passengers were forced to wear protective masks, which was controlled by AI systems applied. Thirdly, DiDi allotted separate fleets for medical workers. Luckily, the operator successfully survived during the lockdown periods.

At the moment, DiDi operates in more than 14 countries around the world 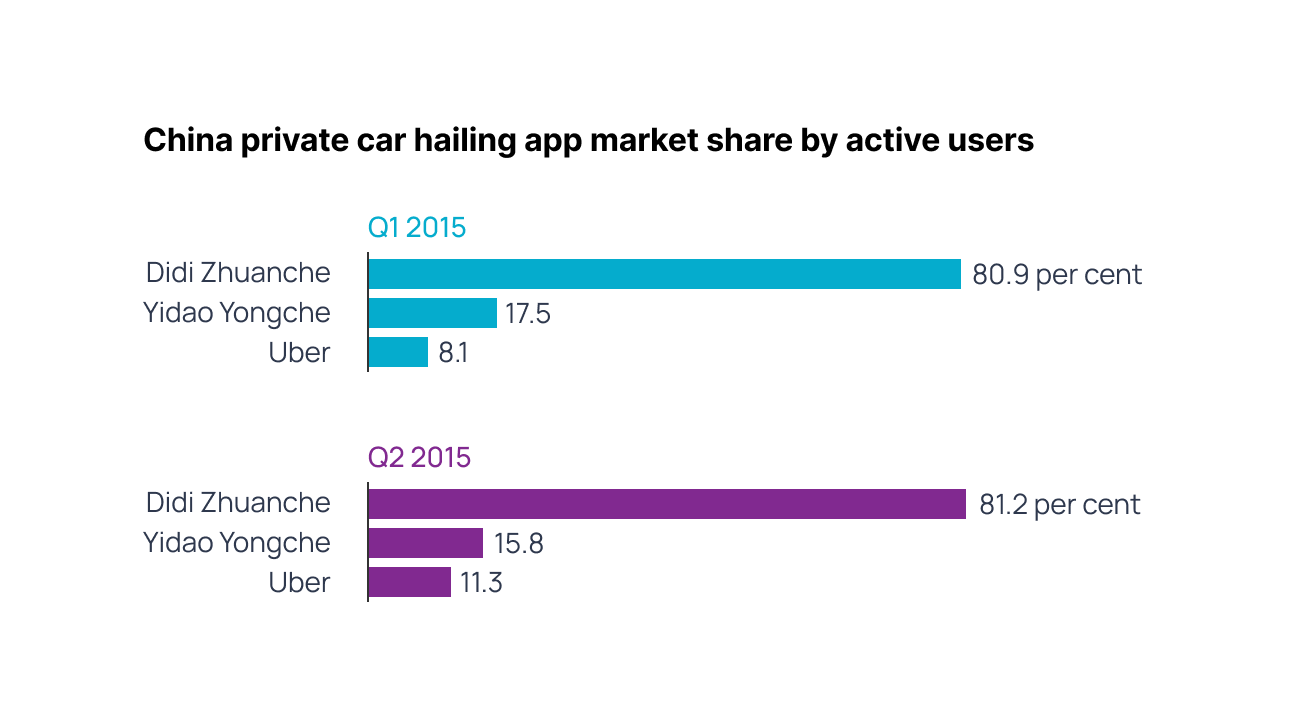 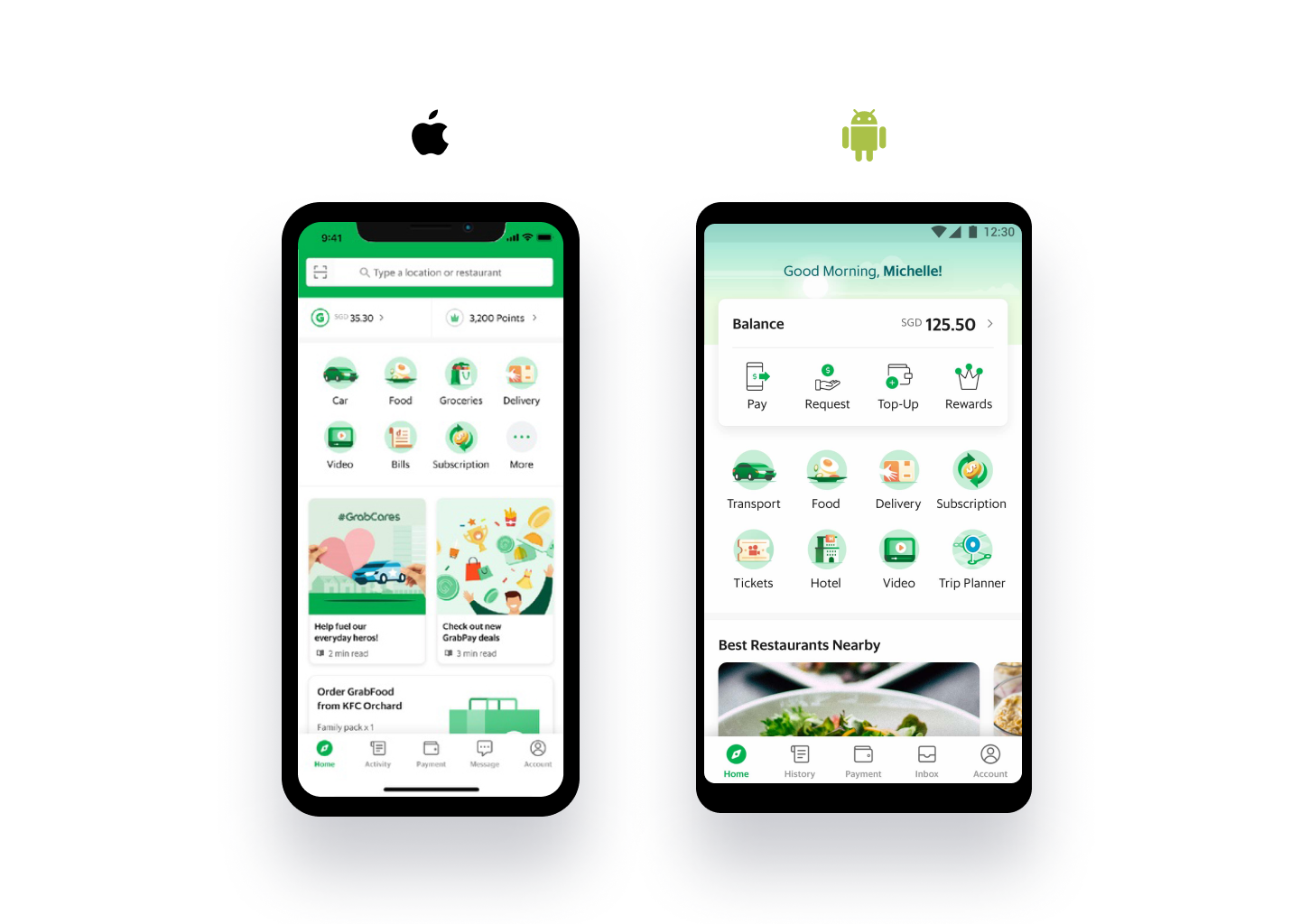 Grab is the most popular ride-hailing and ridesharing service in Southeast Asia with over 8 million mobile app users. The company was founded in 2011 as an Asian analog of Uber. The driver staff is huge. It includes 75 thousand registered drivers. Grab operates in Singapore, Malaysia, Thailand, Philippines, Vietnam, and Indonesia.

In 2020, Grab’s market share in Vietnam was 75%. Initially known as GrabTaxi, it experienced rebranding and significant development. First of all, it introduced a wide choice of cab services. There were high-end cars and motorcycles in the list of proposals. In 2016, a special app allowing communication between passengers and drivers was developed. At the end of the same year, ridesharing services were added to the list.

Later were added possibilities that were not new in the industry and among other operators as well. They included GrabCoach, GrabFamily, food delivery, rides with pets, etc. In 2020, GrabCare was launched, which implied round-the-clock services for healthcare staff. In spring 2021, Grab mentioned a planned SPAC merger with Altimeter Growth Corporation, which is going to be impressive. 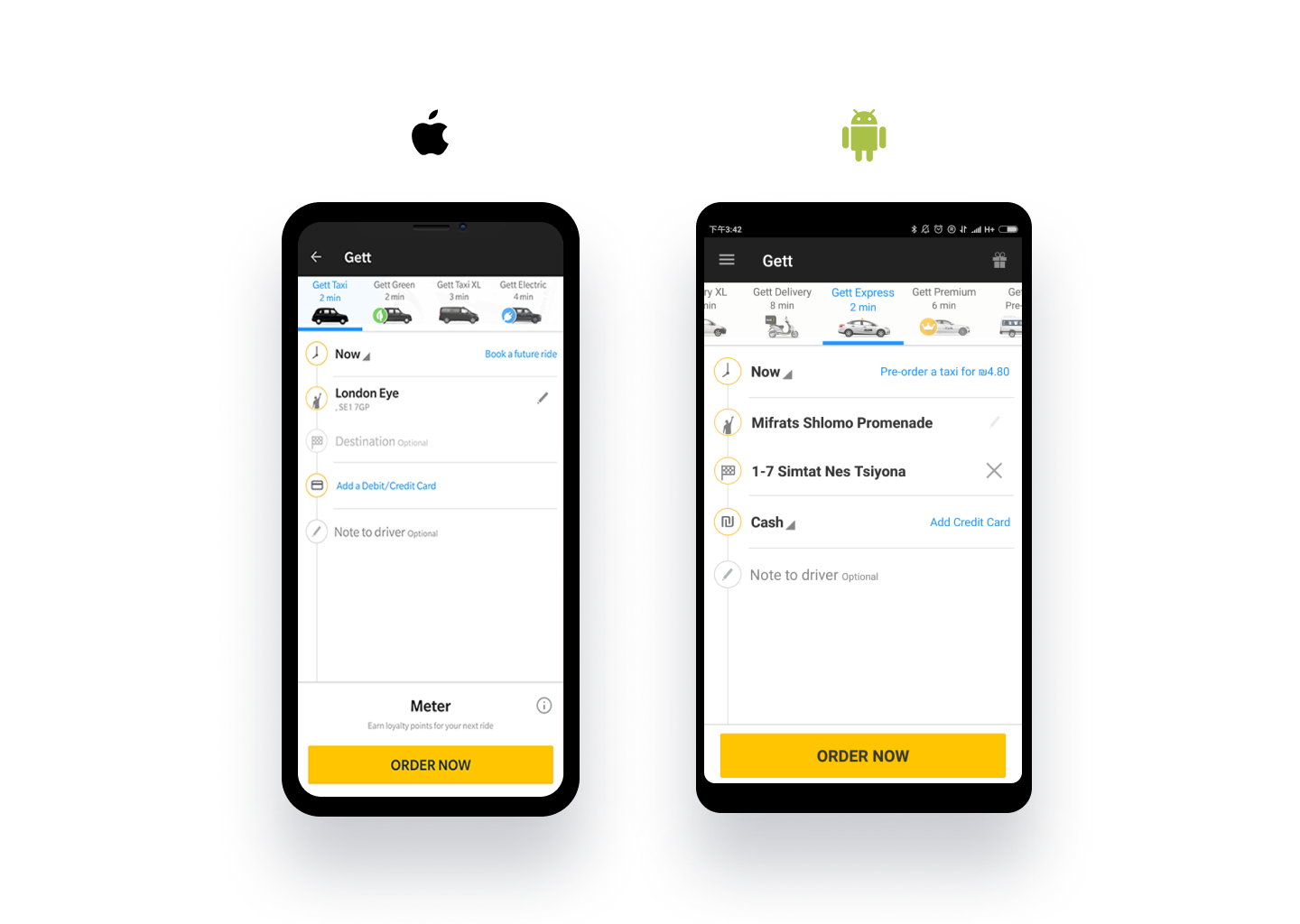 The Israeli ride-hailing service was founded in 2010 as Get Taxi. Now, the company successfully operates in four countries (Israel, Russia, the USA, the UK). Gett is a GTM platform and B2B marketplace. It has an extensive number of impressive investors, some of which are VW Group and Sberbank. Its market share is not known to date, but Russia is the region where the operator is the most widespread. Actually, the company does not provide taxi services as they are. With the help of its app, licensed taxi fleets get access to the range of orders. All drivers must pass examinations and testing, while passengers are insured during the ride.