Google Maps Alternatives for Your Application: Get More Bang for Your Buck

Google Maps has long been the go-to maps and location data API provider – and it makes sense. Google's solutions are robust and reliable, with a wealth of mapping data available for over 200 countries. With 1 billion monthly active users (and over 5 million active sites and apps using it), you would think that Google Maps is uncontestable. However, ever since Google hiked its Maps API prices back in 2018, developers have been turning to more affordable options. Is it possible to find a budget-friendly alternative to Google Maps without compromising on functionality? Let's find out.

Google Maps APIs have left a bitter taste in the mouths of many developers. A price hike is understandable – but raising prices this drastically was a controversial move. Prior to the 2018 pricing change, if a website or app exceeded 25,000 dynamic map views per day, they would need to pay $0.50 for every 1,000 additional requests. That price rose to $5 per 1,000 requests: an increase of 1,400%.

This was especially harmful to small and medium-sized projects, which saw their monthly Google Maps API costs rise by over $10,000 per month. A change of this size just couldn't fit into their budget anymore – so it makes sense that so many developers are seeking more affordable Google Maps alternatives.

That isn't to say that Google Maps is terrible; it's still one of the most powerful solutions out there – but it only does you any good if you can afford it.

There are three categories that Google Maps APIs fall under: Maps, Routes, and Places.

Pros and Cons of Working With Google Maps API

It's no surprise that Google Maps is the biggest player in the mapping industry. With its huge library of related APIs and comprehensive documentation, millions of third-party applications have decided to use Google's mapping tools, regardless of the expense. However, while Google Maps might be the biggest fish in the sea, there are other contenders. 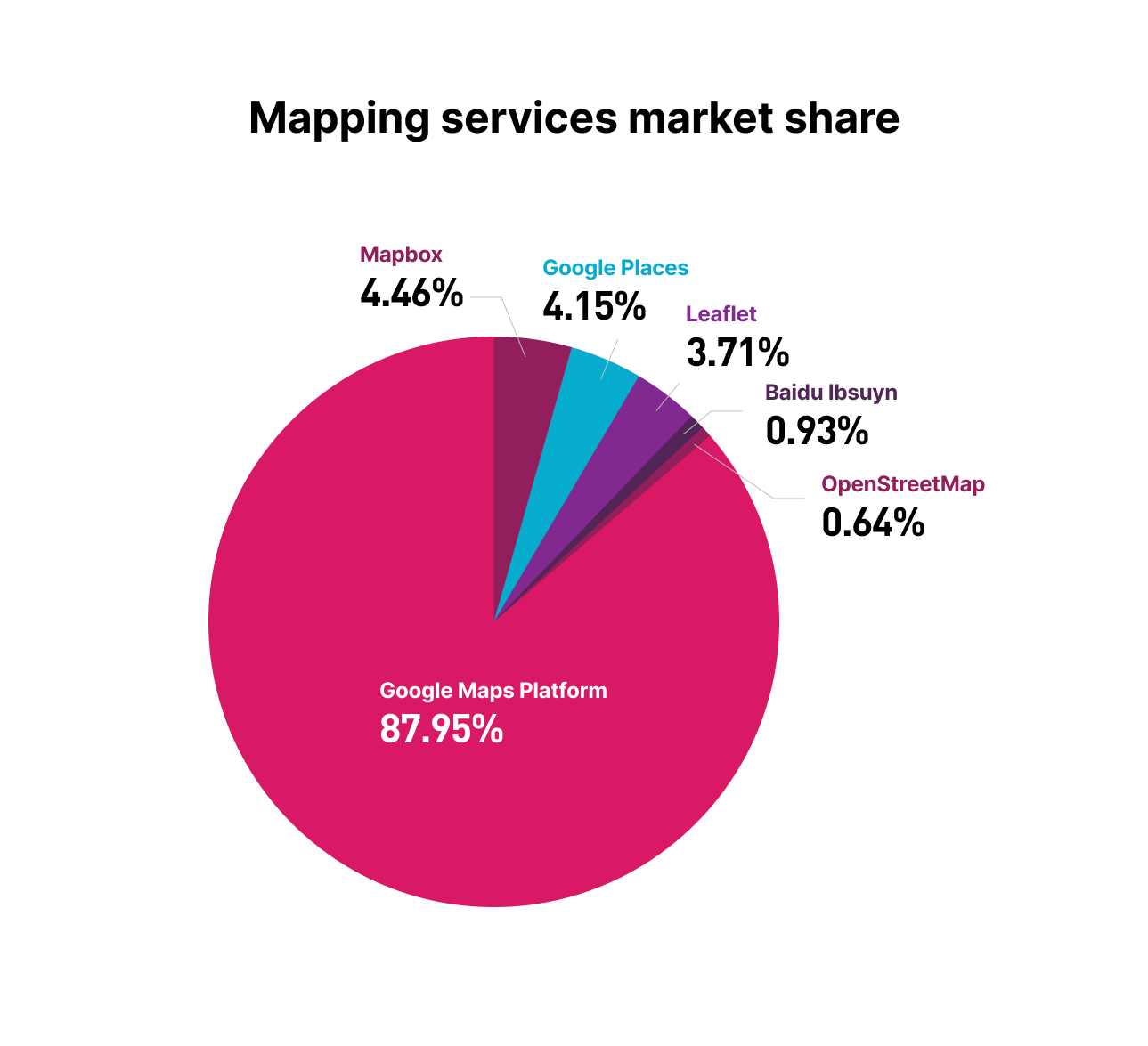 According to research from Datanyze, the market makeup is as follows:

Besides these, there are over 80 other companies producing Mapping and GIS technologies for the market. But today, we are going to look at two powerful alternatives to Google Maps: Mapbox and OpenStreetMap.

The full list of Mapbox services can be seen here, but some of the most popular ones include: 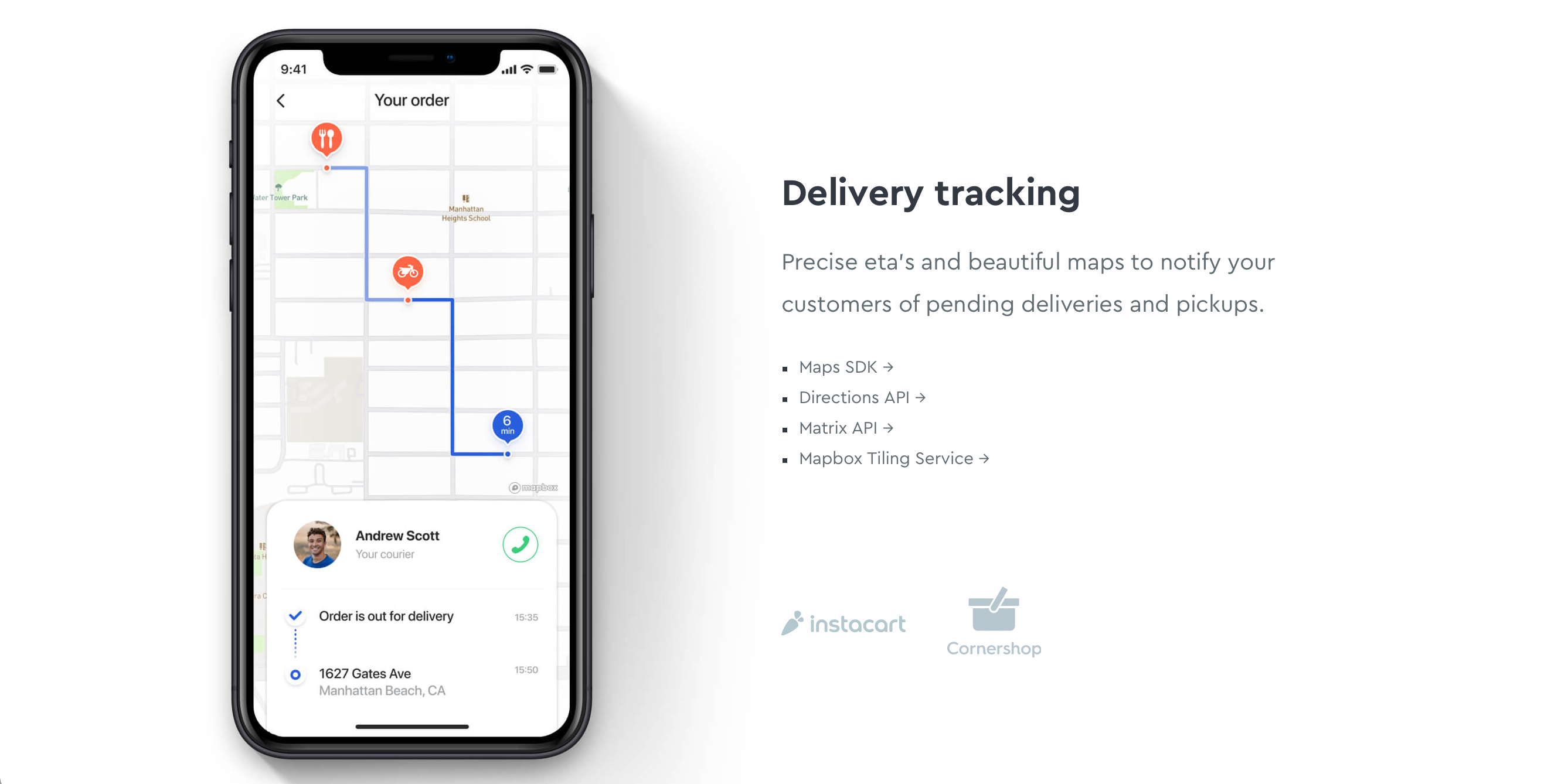 In practically every area, Mapbox is significantly more affordable than Google Maps APIs.

What Apps Use Them 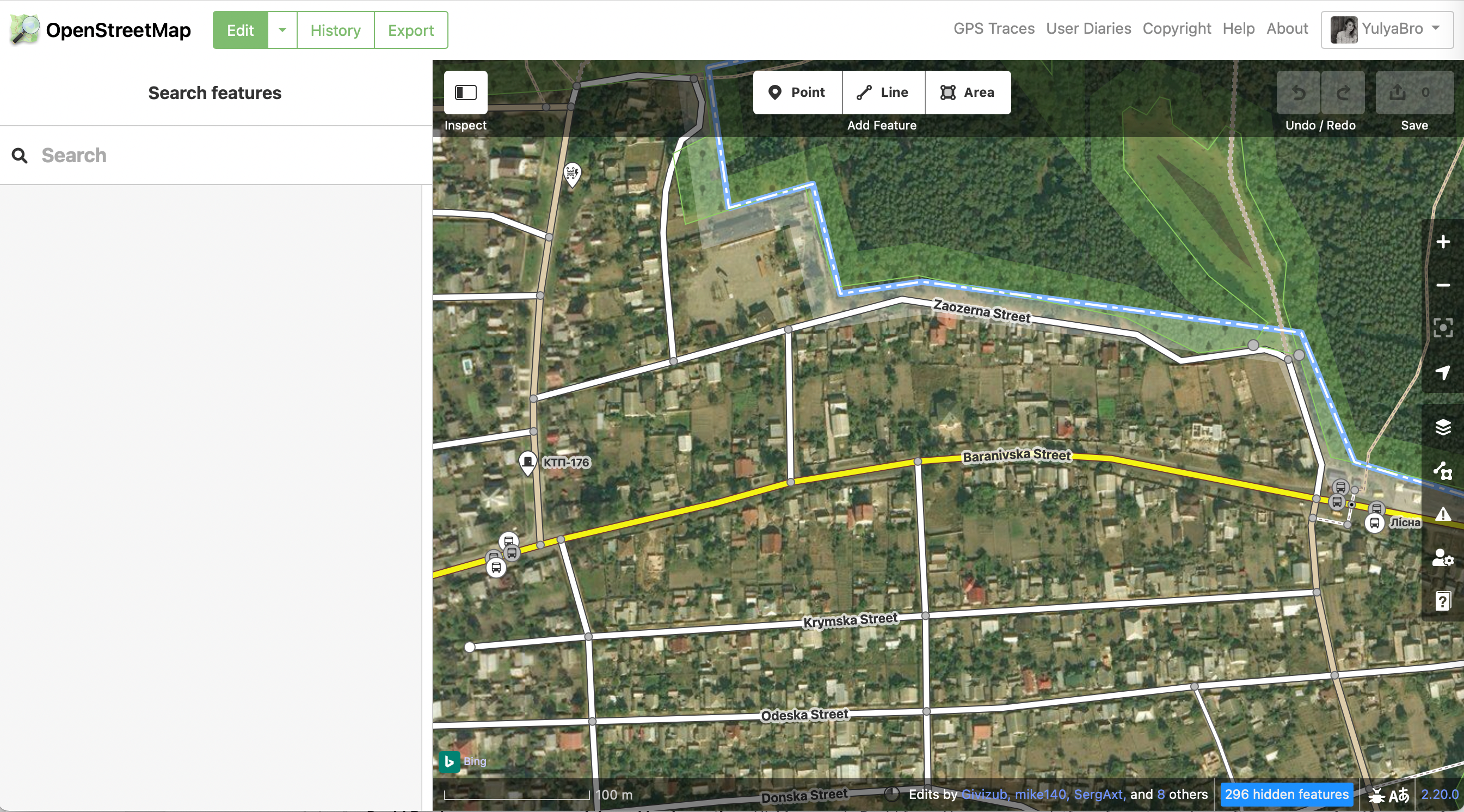 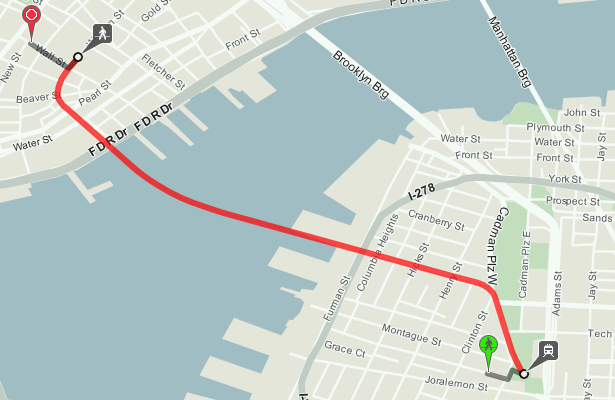 While you can't do much out-of-the-box, there are dozens upon dozens of third-party services that work with OMS data.

If you are looking for the most affordable mapping API, it doesn't get any cheaper than OpenStreetMaps. It is completely open-source, meaning that it's free for you to use.

What Apps Use Them

The main differences between OpenStreetMaps, Mapbox, and Google Maps can be summed up as follows:

It's clear that alternatives to Google Maps are highly affordable, and perhaps you are considering switching to one. But is it actually practical to do so? If you use a cheaper alternative, will your data be of lower quality, and will you lose features? To address these questions, let's take a look at an app that we created here at Brocoders: Gokada, a Nigeria-based ride-sharing app.

Essentially, Gokada was the Uber of Nigeria – but on motorbikes. Its cross-platform mobile app for passengers and drivers contained a map, just like any other ride-sharing application. An ideal map for this application should provide different features for the driver and the rider, but, overall, the following APIs were necessary:

Let’s found out when API calls happened for every use case in bike-sharing application. While user orders new ride we made requests to Geocoding API and Places Autocomplete API. While Google proposes pricing per session for Places Autocomplete we will have only 1 request for case where user chooses his destination for instance by typing it. Directions API is using for building route for the ride to confirm it, also we used it to calculate ride fare on backend. 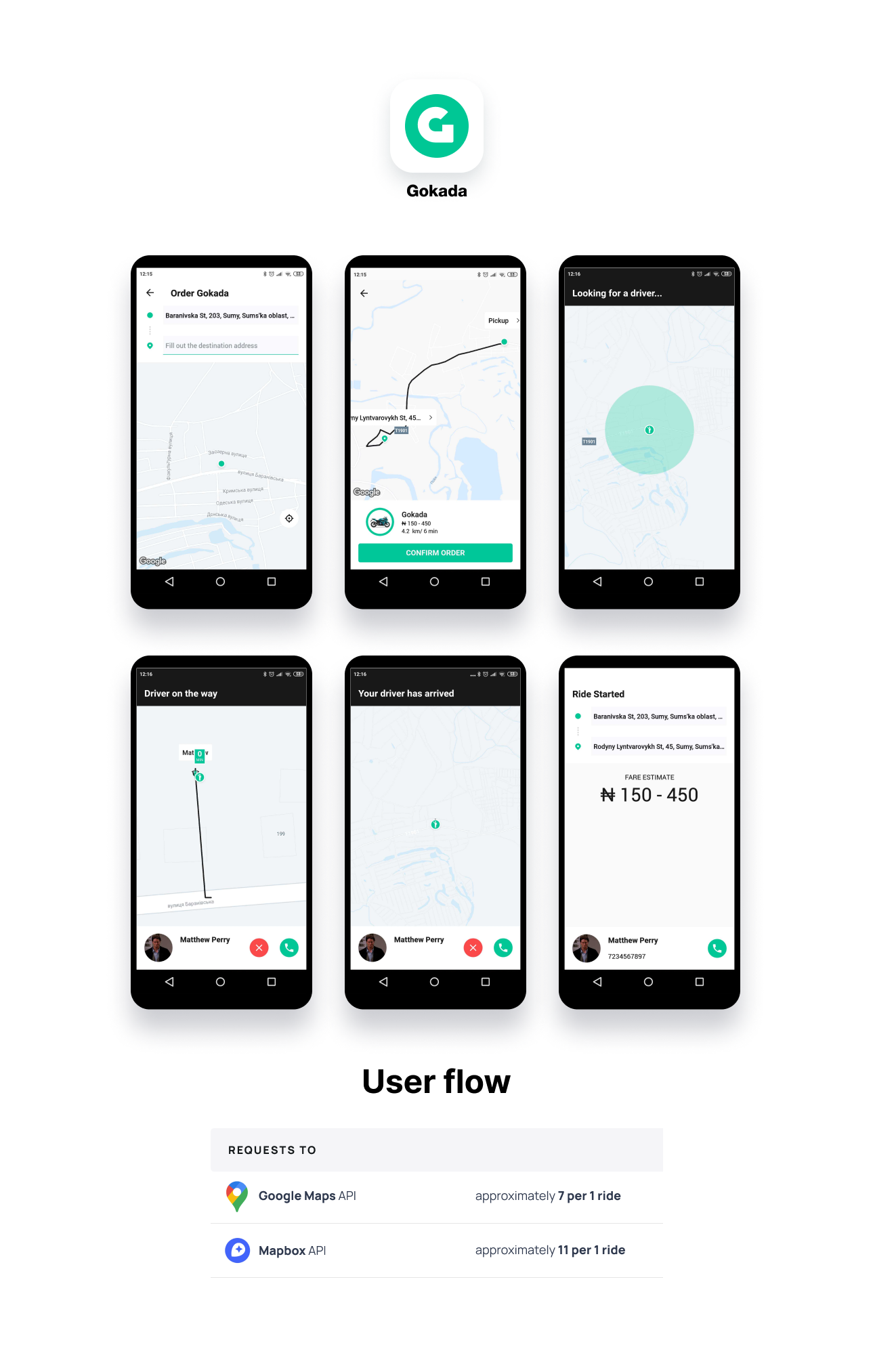 During Driver flow we made requests to Geocoding API to show current location and Roads API to build real driver route. 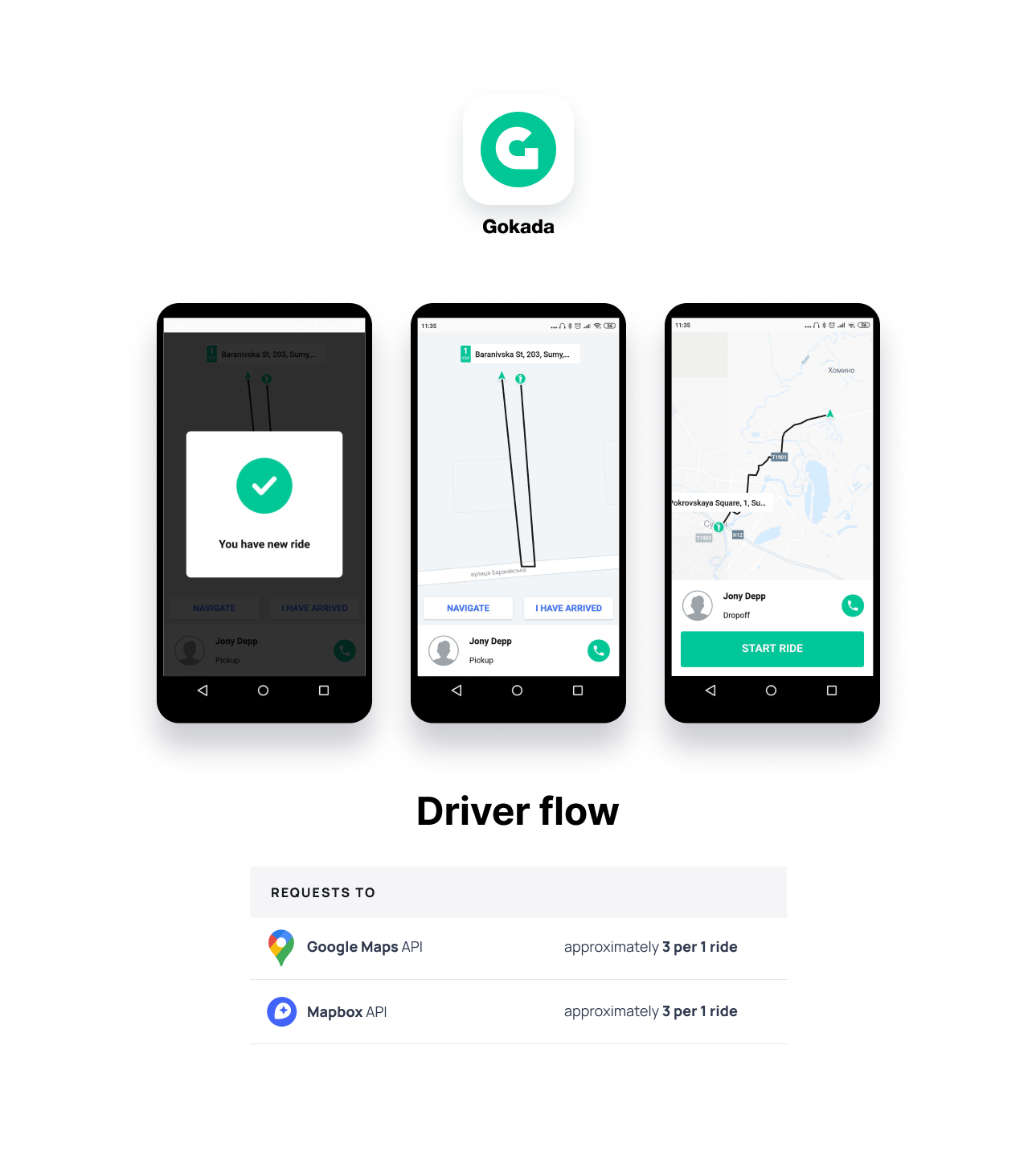 So in total 1 user per provokes approximately N requests per 1 app usage and let’s assume that one user makes 15 rides in a month. So what we will have

Amount of API calls per month for N app users

As we can see using Mapbox saved us 50% total amount for maps using per month.

The founder realized that Google Maps APIs would be way too expensive to handle all internal processes, so they looked into Mapbox and OpenStreetMaps. Both systems' duration and distance data were compared to that of Google Maps. Mapbox was found to be a suitable alternative for Google Maps, and in the end, Gokada decided to work with both alternatives for different scopes of the application. After choosing high-quality alternatives to Google Maps API, Gokada was powered without hemorrhaging cash.

As you can see, it is possible to entirely replace Google Maps APIs with ones from Mapbox while saving a significant sum each month.

Google Maps has the most comprehensive location data out of any mapping API, with 99% global coverage. So, of course, by choosing to power the ride-sharing app with Mapbox, there was the risk of losing coverage. However, as aforementioned, Gokada's developers closely examined Mapbox's existing data for Nigeria and found it to be a suitable replacement for Google Maps. So, if you are considering switching to Mapbox or another Google Maps alternative, be sure to conduct a data comparison of your own.

Running the risk of sounding cliché, there is no "right" solution – just one that works best for your business. So, when choosing which map API to use, ask yourself these four questions:

If you can afford Google Maps, appreciate its 99% coverage, and want to make use of its vast set of features, by all means, go full speed ahead! But by going with Mapbox, you'll get more customization, sufficient coverage, and a much more affordable price.